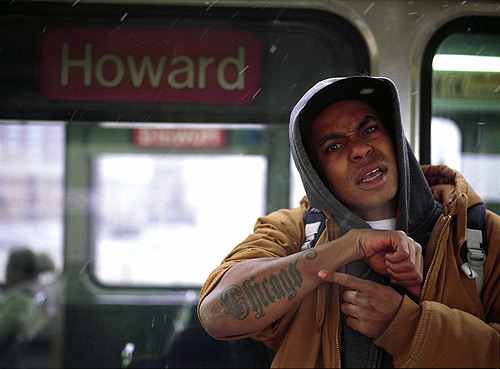 Sam Adams is an inveterate street photographer who loves more than anything else the nitty-gritty individuality of local culture wherever it appears as he goes around the world wherever his passion takes him. What Adams despises is best depicted in his banner image, a color shot of the hazy Chicago skyline dominated by the Willis Tower taken behind lines of sharply focused barbed wire. Adams gets down to business when he moves close in on the streets to shoot the storefronts of shops and walls scrawled with tags, catching along the way passersby who are oblivious to the initiatives that keep the hegemon at bay. Adams would like us all to revel in the “Candy Shop” in Brussels, Belgium, where luminous red-lighted aisles welcome us to the “lolly bar.” Although he has a bias against corporate capitalism, Adams is not an ideologue; he simply wants us to see beyond the hype and glom on to the pleasures of the world around us. Adams’ cosmopolitan provincialism is epitomized in his take of a commuter on the Red Line heading towards Howard who proudly points to the massive “Chicago” tattoo gracing his forearm. (Michael Weinstein)