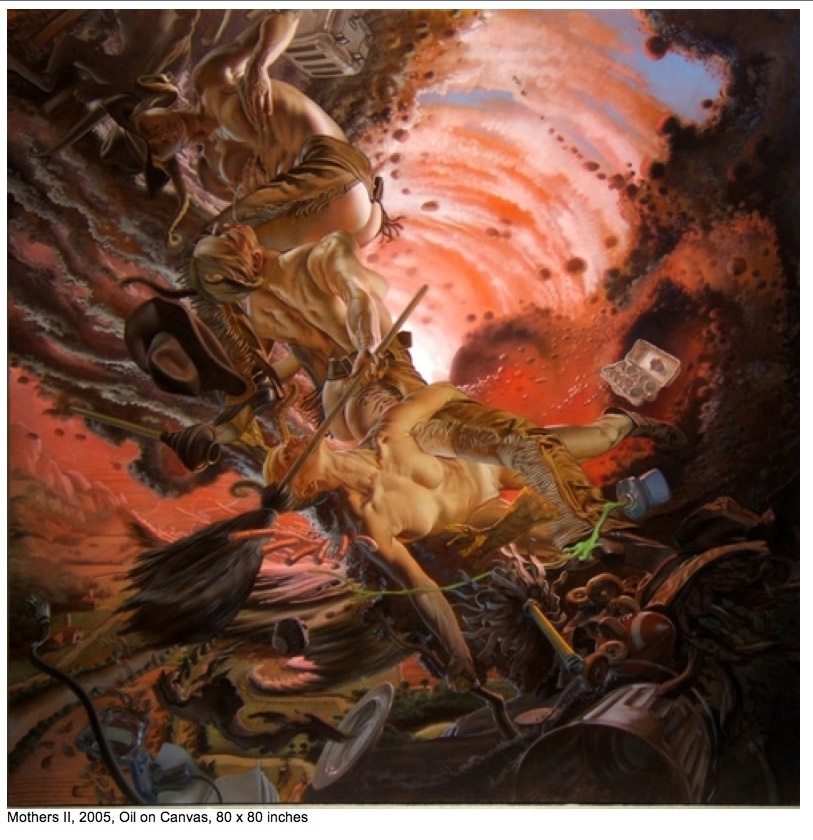 Eschatology is the area of theology that refers to the destiny of the soul after death, and the destiny of humanity at the end of time. From all eras of Western religious art to current Hollywood holocausts, eschatology has manifested visually in numerous explicit tableaux of unambiguous mass carnage. Curated by Front Forty Press, the show now at Hyde Park Art Center purports to provide visions of the end times, both apocalyptic and redemptive. But, as with other exhibitions attempting this theme (such as the morbid 2008 Torino Triennale, titled “50 Moons of Saturn”), the options available in terms of secular modern imagery appear tragically limited, despite the imminent catastrophes we allegedly face from weapons of mass destruction, nature, credit defaults, what have you.   Nonetheless, the show features some lovely ominous landscapes, including Jean-Pierre Roy’s science-fictionoid oil painting “The Black Damp,” Richard Misrach’s fairly self-descriptive photograph, “Swamp and Pipeline, Geismar, Louisiana,” and, next to it, a drawing by David Opdyke of a field empty save for several air vents emerging from the earth, titled “Undisclosed Location.” A series of chaotic abstract paintings and drawings are splattered throughout, including works by Nina Bovasso, Ricky Allman, Emilio Pere and Andrew Schoultz (who also did a striking mural outside the main gallery), not to mention the poster girl of hard-edged abstract explosions, Julie Mehretu. The figurative pieces and the quieter abstractions were less successful; while they strive for a ravishing atmosphere of hypnotic emotional depth, this is a difficult effect to achieve without risking lurid or precious sentimentality. The “rapture” aspect of the title may have originally denoted the collective millennial redemption of the blessed, or the individual mystical ecstasy expressed in Bernini’s sculpture of St. Teresa, but, maybe even more than the pessimism of Armageddon, salvation imagery requires dramatic content to awaken our reluctant relationship to the cosmos. (Bert Stabler)