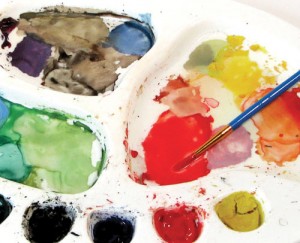 The line stretches nearly around the block, with people of all descriptions holding portfolios, paintings and varied sculptures. Jimmy John’s employees are passing out samples and a School of the Art Institute student is filming artists for a project.

Only an hour in, more than a hundred artists have already shown their work in hopes of being chosen for a new Bravo reality show. The yet-to-be-named show, produced by Magical Elves and Sarah Jessica Parker’s Pretty Matches production company, will be a “creative competition series among aspiring contemporary artists.”

Those interested began arriving with applications, resume and work samples at 5pm the night before the open casting call at Sullivan Galleries on State Street.

Michelle Woody left St. Louis at 4:30am to get in line with her paintings and photography about six hours later. She says she focuses mainly on celebrity portraits and juxtapositions and expects the show to be “‘Project Runway’ for contemporary artists.”

Still, she’s being realistic. “I just want people to see my work, even if I don’t get on the show. It’s really just about showing my art.”

Marian Nixon of Chicago, however, jokes she’s there to win. The pattern designer and artist “loves the reality shows. If Sarah Jessica Parker did a car wash, I’d do it.” But really, she says it’s all about looking for recognition.

Danielle Madole, who has befriended Nixon in line, agrees. “I just want to do what I love to do and create some good art.” The Chicagoan works with silkscreen on paper and canvas. “I think it’s gonna just be a low-budget reality show. I’m just sayin’ it’s not gonna be swank,” she laughs.

The two women are chatting with Roy W. Jones, an artist from Cincinnati who does traditional, abstract, sculpture, painting and Web design. Jones lost his day job in April and is “trying to make do and at least put myself on the map in my hometown.”

He wants to come in second, which he thinks would give him more freedom. But no one knows details of how the show and call will work. “It’s a little sketchy—that’s an artist joke,” he smirks.

Christian Bradley West represents those who came a long distance. The Atlanta artist read about the casting call in a Vogue article with Sarah Jessica Parker and arrived at 6am to get in line for the 10am start. He has made it through two rounds of judging with his silver emulsions on aluminum and glass. “The only thing they ask you is about your work, nothing else is discussed.”

Kelly Zalenski, however, wishes she had asked for more after her presentation to the judges. Told her cityscapes and pet portraits aren’t “the right fit for what they’re looking for,” she regrets not asking for feedback. She says the “get to know you” stage moved very quickly, though judges did look through her portfolio and asked questions. Hopefuls were then taken in groups and hers received “the bad news.”

Still, she isn’t second-guessing driving from Columbus to get in line this morning as number 112. “I would’ve been mad at myself if I didn’t at least try. It’s hard to know what they’re looking for. Maybe I’ll try again another season.” (Amy Brachmann)