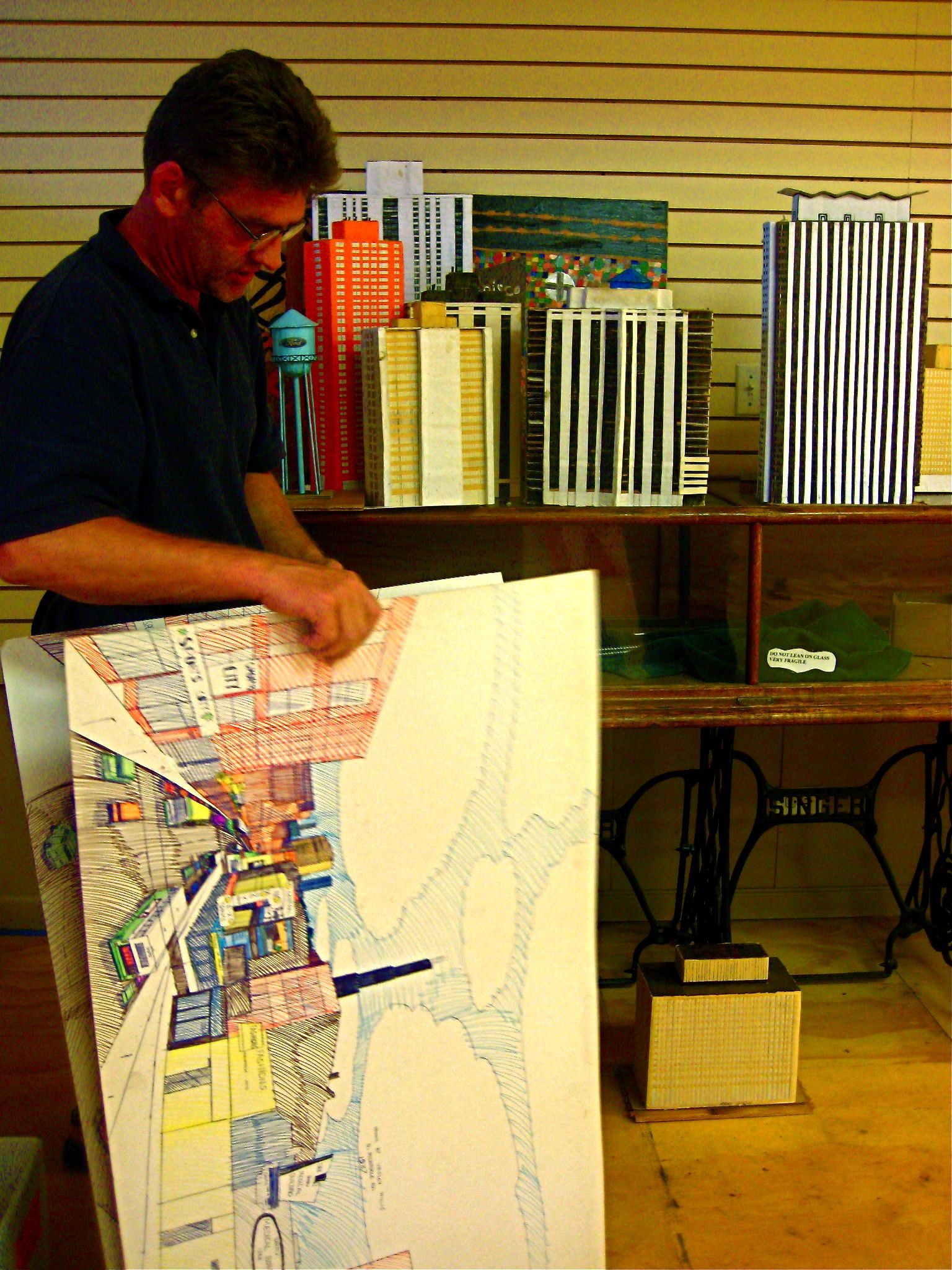 Collector Peter Lemke in his gallery

“Here it is,” he says. “It” is stunning. To enter Peter Lemke’s gallery is to enter a forgotten world of Chicago street art, a time capsule of work from nearly a dozen artists, some of whom have since moved on to other cities and other projects, some of whom are still residing and creating right here on these very streets. Lemke walks over to the nearest wall and grabs from a heap of poster boards.

“These are my Wesley Willis pieces,” he boasts, and holds up a fish-eyed image of Milwaukee Avenue drawn by the deceased outsider artist. “Wesley gave these to me,” he explains, placing the poster alongside sixteen others like it, “but these I saved.” Lemke gestures to the walls of the gallery. Though the stack of Willis works is impressive, it is the gallery walls that truly amaze: the product of Lemke’s self-imposed rescue operation, an operation that has provoked the interest—and the ire—of a number of artists.

Peter Lemke began collecting street art in 2004 when, while living near the intersection of Milwaukee and Halsted, many of the installations Lemke had enjoyed seeing in his neighborhood began to disappear or suffer defacement. “When one of my favorites went,” he says, “that was it. I started taking them down before any more got ruined.” He holds up an older piece by (art)illery, a yellow canvas featuring a wounded eagle in flight. A Sharpie-scrawled “holla yo!!!” mars the work, alongside childish doodles and scrawls. “This is disgusting,” says Lemke, who is very vocal about what he does and does not consider art. Insistent that he couldn’t let taggers and Daley’s buffing crew continue to destroy these installations, Lemke spent the next four years taking down the works—some of which are impressively large—and storing them in his basement and garage so that they could later be enjoyed by the public in a safe environment, free from the city’s deleterious elements. 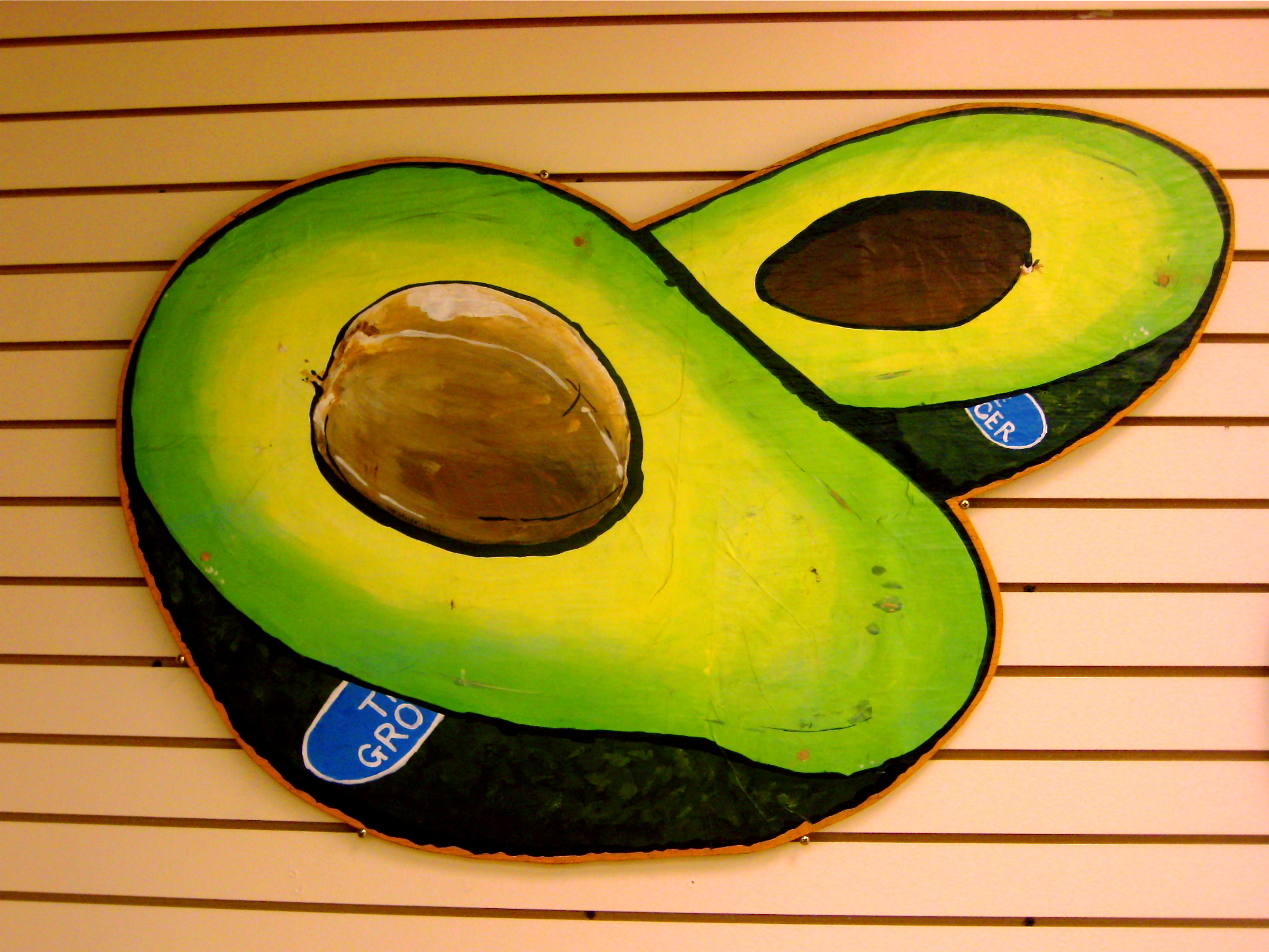 A work by The Grocer

According to Lemke, his four-year campaign has been conducted with the single intention of rescuing great works of street art (which, in his opinion, is inclusive only of sculptural and installation pieces. Pasting and stickers are not represented in his collection and, when asked about sprayed works, Lemke defines them as “lame”). Lemke’s act of preservation, which ended the weekend street artist Solve died, is to, as he puts it, “show the world that there is a great alternative for regular graffiti.” With the upcoming Milwaukee Avenue Arts Festival, he hopes to do just that by bringing the whole of his collection—more than a hundred pieces by a number of Chicago artists, living and dead—out of his basement and into his temporary gallery so that the public may once more enjoy these works in a safe, contained environment.

And that’s where it all gets a little sticky.

According to Elisa “Pooper” Harkins, “Every street artist wants his/her work to become part of the landscape. That’s why we do it.” Harkins, whose art is included in the collection, is a local artist, musician and curator who says she finds Lemke’s curatorial statement offensive and his motives as a curator suspect. “He never asked if he could show my work,” she says. “He never thanked me. He’s never purchased any of my work, supported me financially, even though he finds it so interesting he would get a ladder and unscrew it off of a wall.” The Grocer, a prolific artist who specializes in large acrylic paintings of produce, echoes Harkins’ statements, stating: “Peter Lemke took my 4’x3’ painting of avocados that was intended for public enjoyment and put it in his stairwell. To my knowledge, he has never purchased a painting from any other street artist I know in Chicago… I’m not a rich man but have purchased many paintings from this group of artists to support their work and what they’re doing for the community.” 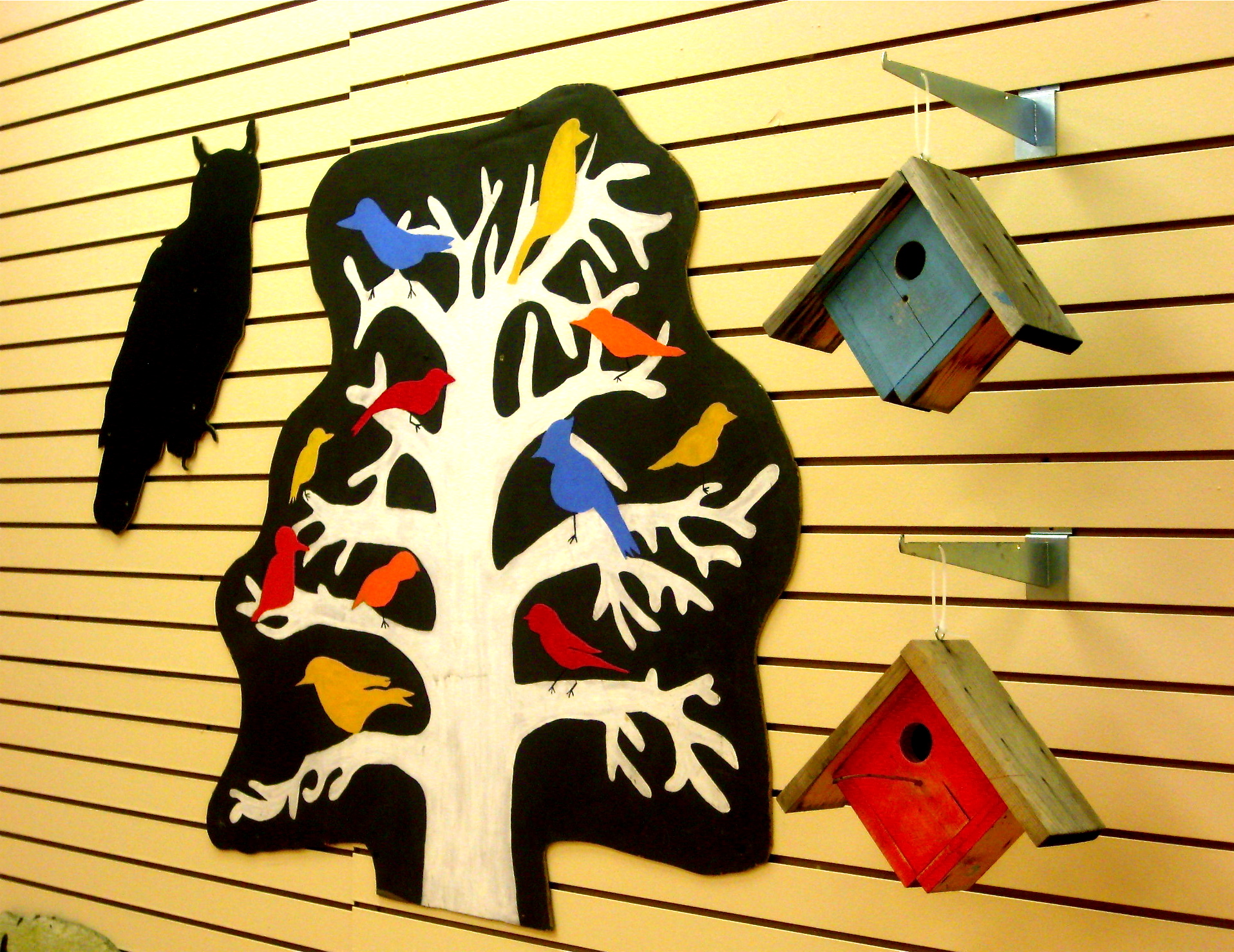 It is the very community of which the Grocer speaks that seems to be up in arms over Lemke’s ‘acquisitions.’ Fighting to display their installations against Mayor Daley’s Graffiti Blasters Program (a program that costs Chicago taxpayers $7.8 million a year), many of these artists are deeply offended by Lemke’s removal of their work, which they risked fines and arrest to display.

“Once our work is on the street, it’s out of our hands and up to chance,” says artist SARO, who was notified of the collection by Lemke himself. “[But] when we put up work, the general idea is you want the most people to see it. A stolen board [limits] the amount of people it will be shown to.”

There has also been much talk on the subject of Lemke’s profiting from the sale of his collection, but he insists he will not be selling anything. Says Lemke, “It is a time capsule in a way of a brand of art that doesn’t appear all that often and not usually in these quantities. For every piece that I managed to bring home many more were destroyed by the city, vandalized or otherwise met their doom.”

The artists, however, remain unconvinced.

“He is using his line of ‘preservation’ to cover up for the fact that he took something that wasn’t his,” steams Harkins, who says Lemke tried to provoke her in texts and Facebook messages.

The Grocer concedes that the matter of “ownership” when it comes to street art is up for conjecture, but he still can’t help but feel that there is something off about this whole situation: “If he was an avid patron of urban artists in Chicago and did his ‘saving’ I think that might change the way most artists perceive him. As-is, though, I feel like what he’s doing is not supporting artists and stealing from the public. I don’t think he’s a bad man, I just think he’s made up this justification in his mind for taking what he wants from the community around him.”

Chicago citizens, artists and collectors alike are welcome to decide for themselves next weekend, when Peter Lemke’s Collection of Milwaukee Avenue Street Art will be made available to the public… again.

It’s funny to me that the artists want to control what happens to their artwork once they post it, illegally, in an urban landscape. Some are offended about Mr. Lemke not “paying” for it, even though he does not re-sell or make a profit on it. If payment is at the core of the problem, then perhaps seek gallery representation and confine your activities there. But trying to control what happens when you hang art in the “wild” is amusing — perhaps the artists would prefer a nice Polish grandmother who has resisted the gentrification of her neighborhood to grab… Read more »

@missmaam: I think the artists were doing just fine without their work being featured in Lemke’s “gallery show” or being quoted in this article as a result. The implication that they should be appreciative of this 3-day display, when their work has lasted months on the street (well over a year in the case of some of the Grocer’s work), comes across as rather condescending. Far more people see the work and enjoy it – regardless of your personal opinion as to its value – when, as in the case of the avocados, it is not unscrewed hours after its… Read more »

Reply
get off of the streets, and into my car. « Thepodcollective

why doesn’t this person just take a photo? It will last longer.

I guess I want to clarify that I am not angry. I don’t think my email responses are seething. I was just stating my opinion. I think that public art should be left in the public (whether it’s guerrilla or not). I don’t think this is a good trend for street artists – it is hard enough as it is to keep pieces up. If everyone felt entitled to the ownership then the streets would be empty. The point is not that we don’t have control over the work, the point is that this guy is privatizing public work. That… Read more »

This article is another example of a journalist’s rush to simplify a complicated issue to an “either or” duality. Yes, its true that street artists know that their work will eventually dissapear when they voluntarily put it into the public domain, but it is ridiculous to treat Lemke as some kind of selfless good samaritan because he is not (currently) charging money for the public art that he appropriated for his private collection. There are many ways one can profit in the art world without actually making money on the spot. One is by generating a controversy, by accumulating cultural… Read more »

Being an artist myself who has work in the streets I have an understanding that when I set the work free there is no telling what its’ fate is or who will end up with it. That’s why I also put out work intentionally for people to find, keep and enjoy. As for what Lemke is doing is it wrong? I’m not defending him I’m just saying what he is doing should just motivate the artists to be more creative and make the work harder to remove or find spots which are harder to reach. Use Lemke as motivation to… Read more »

I’m actually really impressed by Lemke. What an ingenious idea! The only problem seems to be that he’s not really thinking big enough. There’s a big shiny bean-like installation downtown that gets etched on every so often. Maybe Lemke should take Cloud Gate home to protect it from vandals. If he’s interested, I can also direct him to some sculptures of pants, the American Gothic couple, and even a genuine Picasso. We must get all of this public art out of the public’s view and into a safe basement or studio where it can really be appreciated.

Sickening. My introduction to this guy’s offensive knack for stealing street art was his “safe” temporary gallery on Milwaukee last weekend. During my visit he stood with his arms across his chest and droned on and on to a couple that appeared to be impressed by his ceaseless hot air. I am not a street artist, but anyone who is not under a rock ought to understand that street artists leave their work in the street at their own risk knowing that they become part of a public venue. That might include having the art tagged or destroyed. Lemke’s vanity… Read more »

[…] And regarding the repossession of street art, check out new city’s article here. […]