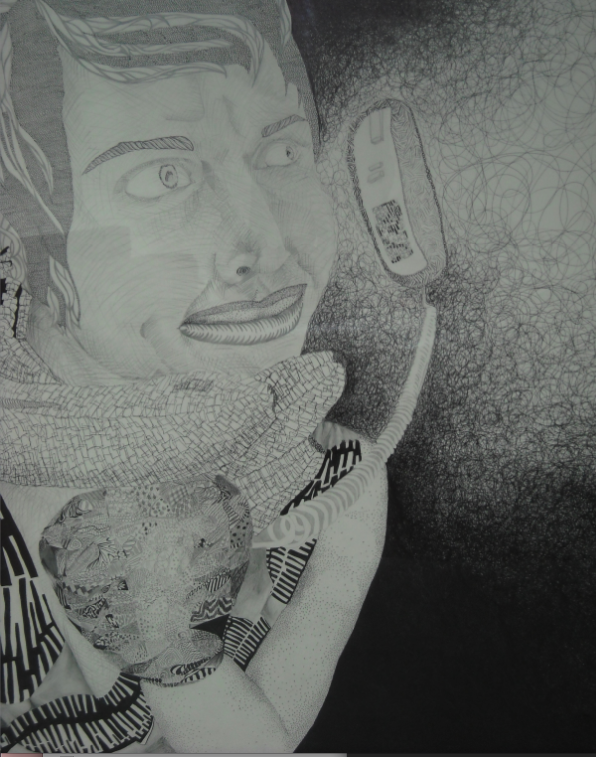 The problem of an open-call group show is that the submissions can range from the wonderfully eclectic to the utterly clichéd. Such is the case at Barbara & Barbara Gallery’s new exhibition, “The Telephone Show.” Various pieces align the wall but there is no cohesiveness evident. It was a disappointment to note that many of the pieces seemed to shy away from the various “issues” that could relate to the telephone: the necessity of mass communication in our everyday lives, the change in its size and primary functions throughout time, the advent of text messages.

The few pieces that were most captivating specifically addressed our means of communication. In “Call Log” by Celia Rose Marks, a month’s worth of incoming and outgoing calls were printed inside of a palm-sized zine. The bulk of calls were made in Chicago to Providence, Rhode Island. Many of the calls were made repeatedly and at both short and great lengths. This was in contrast to her transcripts of saved voicemails. Without the full context, the content of each voicemail was at times humorous and jarring. The transcripts of what we say on a regular basis, devoid of the technical and grammatical rules employed with the written word, demonstrate a clear discrepancy between speech and text. Jacqueline Roig’s found assemblage of objects, titled “Emergent See”—and including things such as the head piece of a telephone, a pine cone and a scrap of paper with phrases such as, “A period of doubt and orientation” and “A period of sear and trial solutions”—beautifully offset the sometimes juvenile works also on display. Roig’s tiny, box-like assemblage displays the connection between our speech and the physical objects we aim to describe. Those two pieces alone save the show from being devoid of rich messages. (Britt Julious)