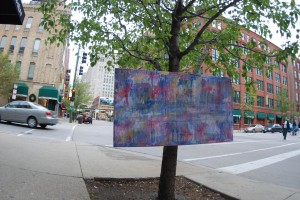 “What are you painting?” asks a 6-year-old boy who has been fishing in the harbor.

“What kind of picture?” the child presses.

“An abstract picture,” Skoff answers. “Do you want to help?”

Ten minutes later, after much reassurance from Skoff that he is allowed, the young boy smudges vibrant blue paint across the empty areas of the canvas. After becoming bored with blue, he asks Skoff if he has some red paint instead.

“I could find some red for you if you’re feeling red,” Skoff says as he sorts through his oversize bucket of paints before finding red near the bottom. “You’ve got skills man. Good use of color. Nice shading. Are you sure you haven’t done this before?”

Skoff, a Chicago-based artist, has sold paintings all over the country for as much as $3,000. Yet one of his favorite parts of being an artist is allowing anyone to be part of his work. To help achieve this, in July he began free “art hunts” where he leaves his paintings hidden around the city and encourages people to run around, following his clues in search of them and keep what they find. Since then he’s left more than 100 free paintings around Chicago and become a sought-after artist for the paintings he sells. However, he still cherishes the art hunts that have erased the focus of money and brought the enjoyment and fun back into art.

Skoff grew up in Franklin Park, Illinois, in a neighborhood where it was common to borrow a cup of sugar from a neighbor. “Everyone on the block had a skill and shared it free with all the others in the neighborhood,” he says. “So, I guess my ‘mission’ is to recapture that comfort. Travel the country and give my skill away and inspire others to give and share theirs too.”

He first started leaving his mark around the city in July with his series of unique pieces titled “Little Things.” These pieces were inspired by concepts that Skoff believes make life what it is, such as hope, interest and trust. Each “Little Thing” includes a tile-sized painting representing a subject, which is placed on a tiny easel, accompanied by a wooden mannequin artist and stamped with Skoff’s Web site on the back.

After leaving several “Little Things” around the city, Skoff decided to experiment with leaving some of his larger paintings for people to find. “I started thinking, well, I have all this art in my house that’s not selling and it’s not doing any good just sitting here where nobody can see it,” he says.

Skoff has a different view on giving away his art to his fans than other artists. “These people are willing to hang it on their walls and tell everyone they know how much they like it,” he says. Once he started looking at the hunts as an opportunity for free marketing, it made more sense to him to give away as much art as he could.

After the first round of free paintings went out, Skoff received about fifty emails from eager Chicagoans who wanted to know when the next hunt would be.  As the number of participants increased with every art hunt, he began to leave multiple pieces out on a single day. “The people who really wanted them would have the ability to go out and just grab them themselves, so it kind of just evolved,” he says.

A typical art hunt starts with a mass message on Twitter and Facebook alerting people of the date and time the hunt will begin. Skoff and his “co-artist,” Sam Brown, a 19-year-old former hunter herself, then select between five and fifteen pieces of artwork that haven’t yet been sold and load them into the back of Skoff’s truck.

Becky Amarteifio, a 29-year-old art-therapy student, first heard of Skoff’s art hunt through Facebook and decided to participate because she liked the message and attitude his artwork represented. “Instead of housing his art in a gallery, he chooses to make this big city his canvas and share his art with everyone,” she says.

The locations for the paintings are picked at random once Skoff and Brown get into the city. Once a spot is chosen, they take a picture of the painting, come up with a clever clue for the location and upload it online where it is then forwarded to all of the art-hunt followers. “Picking the location’s fun whether we walk or drive because either way we end up being spotted or followed,” Brown says.

According to Skoff, the actual hunt is just as much of an art form as the paintings because of the great story that people take home with them. “I get emails and happy stories about how people ran around the city, beat other people to it and actually end up winning it,” he says. “People jump up and down when they find them and cheer.”

Linda Decarlo, a 52-year-old Oak Park resident, makes a whole day out of the art hunts with her 18-year-old daughter. For each hunt they drive to Wicker Park to their usual starting point, Starbucks, get a pre-hunt energy buzz and wait for the clues to begin.

“Once the clues start coming, the tempo in the car picks up and we’re off looking for clues,” Decarlo says. It wasn’t until their second hunt that they claimed their first piece of free artwork.

Decarlo remembers the clue came just as they were turning on North Ashland Avenue by Grand Avenue. “The painting was right by my office and we were just five minutes away,” she says. They approached Skinner Park and spotted the wild blue, red and white splatter painting in a flower planter surrounded by people oblivious to its presence.

“We pulled up and my daughter got out hesitantly; She felt like she was stealing something,” Decarlo says. “I told her to go get it and she ran and we claimed our first piece of Skoff art. You could still smell the paint. We were ecstatic.”

About twenty people participate in each art hunt, making the air thick with competition. Often multiple people come across a piece at the same time and make a mad dash in order to claim it first. There have even been times when several people reach a painting at the same time and end up fighting over it, Brown says.

One reason Skoff believes his art is so popular is because it’s simple. He primarily does abstract paintings because “they’re fun and they’re easy,” he says. “Life is challenging enough already.” Most of his pieces are done with squirt bottles, geometric shape stencils and even paint thrown off of a rooftop to get the right kind of splatter.

“My art is more the fun behind making it,” Skoff says. “I’m not one of those people in the art community that writes ‘fuck you’ on a canvas and then puts it up in a gallery and says, ‘you don’t understand.’ To me, it’s like you want something pretty that you want to hang in your house, and if I can make it and you can enjoy it that’s more or less my style.”

He hopes to one day be able to produce his artwork without having to rely on profit from side jobs. He currently runs a landscaping business part-time which allows him to produce and give away art for free.

Back at Diversey Harbor, Skoff looks at the enormous canvas that gleamed with yellow, red and dazzling aqua streaks that made the blue harbor seem dull. The little boy turns to him and then looks down at his mottled paint brush.

“OK, I don’t want to paint anymore,” he says as he hands it over.

The little boy runs back to his parents and begins to point at Skoff and explain all about the painting.

“See, it’s fun stuff like that,” Skoff says as he waves to the little boy. “How often in my landscaping does some kid up and want to help cut the grass? It could be a good lifestyle and that’s what I am hoping to do. Be able to just live the life that this could afford me.”