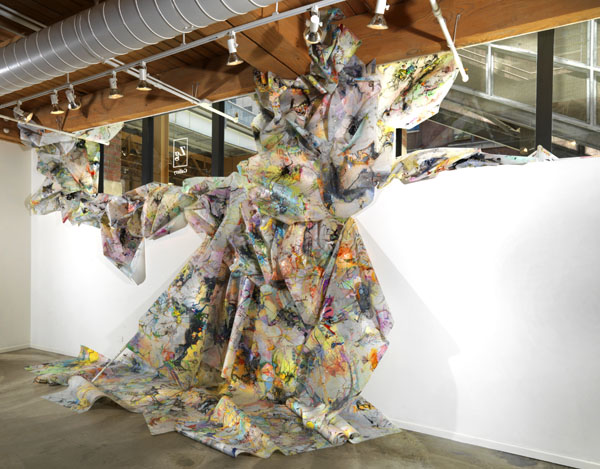 There’s a gee-whiz element in the art of Anna Joelsdottir. Her current exhibition, “The Dandelions Are Over,” takes a step beyond previous works, which have evolved in series and often develop around negative space. Now, here, we  find explosions of color, activated and covering entire canvases with mystical landscapes and abstractions.

Joelsdottir’s centerpiece, a quasi-sculpture installation, “Flood,” is a lurching, plunging avalanche of mixed media on joined pieces of mylar. Its intense splashes of yellows, tangerines and grays are unpredictable, and the work, with its stained-glass effect, refuses to lie at ease. Twenty-four-by-eleven feet from ceiling to floor, it drapes, gathers at points, and rolls across the upper wall, living dragon-like on the edge of chaos, while another disconnected, daring nine-foot work leaps and hangs across the room.

“When I came to Zg to install, I had decided to use the mylar in the front gallery and somehow work from the windows and ceiling making use of the changing light,” Joelsdottir recalls. Alone to fit mood and space into her system she “pushed a pin into the first sheet between the two windows. As the piece grew and began to take shape, I began to understand what it was I was trying to get at, and the title became ‘Flood.’”

A fairytale appears at work here among four canvases, each medium-sized in acrylic, ink and pencil. An additional six small mylar pieces borrow from “Flood,” capturing its translucent effect and color. Those works meet Joelsdottir’s ambitious efforts at transcending language and cultures via her paints, yet they are best served by their copious notes of the complex main piece. (Jeffery McNary)