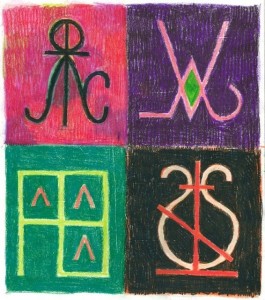 Elijah Burgher introduced me to sigils, which are words or sentences with the vowels removed and the remaining letters crushed into a compact shape. The phrase, now unreadable, resembles an abstract line drawing in its careful composure. If the sigil’s creator wishes to release its original meaning into the world, like a spell, he must successfully activate it by gazing at it during an orgasm or other climactic experience.

Sigils look wonderfully artistic, but they’re not usually displayed as artworks. Instead, they are private matters representing personal desires—for power, love, whatever. Elijah’s sketchbook contains a few sigils interleaved among his drawings, and he admits to burying some sigils in the undercoat of his paintings. The sigils have produced results, he says.

Creating a painting is not magic or witchcraft. The brush is not a wand—that’s hokey—and supernatural fingers don’t cause paint to drip downward. I’m not going to say that painting is like alchemy or that it is transcendent. No, painting is rather the vehicle, the medium that gels all our metaphors. Witchcraft is something else entirely.

Today, the witch lifestyle is pretty romanticized: part lesbian erotica, part goth spectacle, with a dash of DIY spirituality; it’s difficult to know exactly what a contemporary witch is, but they exist among us just as plainclothes Christians do. Their community’s former, historic persecutions are now the stuff of myth and pride, transmuted into token outcastism. 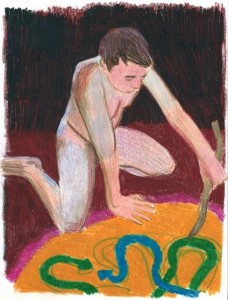 After filtration through years of soft cinematic portrayals, can contemporary witches pursue their efforts in earnest? Many have accepted tongue-in-cheek and self-deprecating policies into their sphere—or is it that witches have always had a good sense of humor? For example, participants in AA Bronson’s invocation of deceased gay spirits wore rooster feather butt plugs, and nothing else, during an otherwise somber ceremony.

Elijah wrote a series of blog posts about the connection between queer and witchy themes in contemporary art, citing several exemplary artists of this genre, including Bronson, Genesis P-Orridge (of Throbbing Gristle), Scott Treleaven (who exhibits with Kavi Gupta Gallery), and William O’Brien (a Newcity Breakout Artist, 2008). He writes of the queer-witch affinity, “I have a hunch it has to do with imagining some form of ecstatic fraternity as an alternative to the forms of community that are available in contemporary society, including the gay mainstream.” So, there can be sub-sub-genres within sub-genres; a revolution turning within a revolution; covens instead of cruising.

Elijah’s paintings and drawings are set in forest clearings, outside of society. In these makeshift cultures naked men, in groups or alone, draw sigils into the sand, canoodle with demons and perform rites and rituals. A dark symbolism protrudes several scenes: sacrifice, beheadings, and suicide, borrowed from various mythologies: Norse, biblical, art historical. Elijah’s paintings and drawings are quite honest. They surface several issues that many might prefer lay buried: violent compulsions, shameful desires, the confusion of the libido with the death drive. 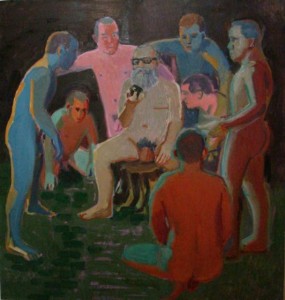 Flipping through Elijah’s sketchbook, we stop on a page with a sigil different than the others; it seems more pictorial than the others. It’s a swastika abstracted into a pattern like an anus, and it rotates counter-clockwise, or “against nature,” says Elijah. Queers, by the very definition of that term, have been defined as outcasts. Embrace that, and it becomes empowering. The ability to step outside of one’s gender is a magical device. “Because shamans (or witches) travel between worlds,” writes Elijah, “they are also permitted some space to cleave from norms.”

“Whenever I look at an artwork,” writes Elijah, “I like to ask what kind of spell is it casting, and if it is achieving the desired result.” One can walk the galleries of a museum with this filter in place. What is being transgressed? Who has the power? Does the spell work? Don’t exclude your own presence.

Elijah Burgher’s art can be found on his blog, Ghost Vomit.