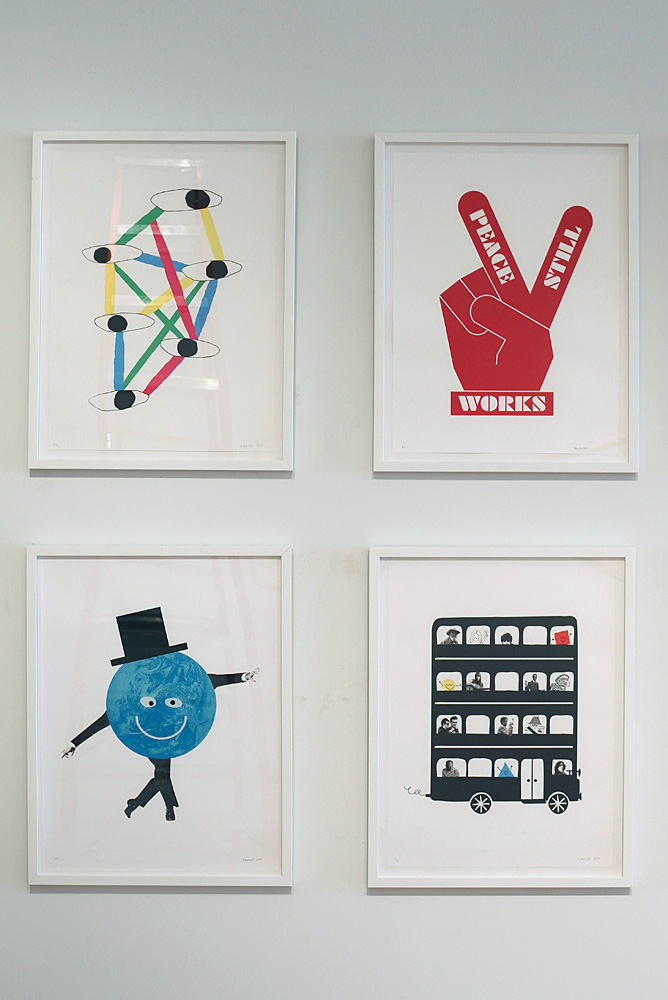 At the show’s core, a dense collage of the artists’ commercial work (largely musical in nature) serves as a collective retrospective, making relative the new works that surround it. There is a notable difference between works old and new, however. Unlike the concentrated wall of past designs, the new works, freed from meeting commercial ends, carry more critical weight.

Perhaps stemming from the show’s title alone, aspects of this inaugural show of “Public Works” evoke an association with social art from the early to mid-twentieth century.  With current economic-political crises-responses what they are, the work that came out of the WPA (an artistic program initiated by the New Deal) comes to mind. Works Progress, Public Works…there’s something there, whether linguistic or otherwise. Considering the overlapping influences of commercial and fine art, it is fitting that social content pervades in varying degrees. When dichotomies of fine/commercial art collapse, so do public/private and communal/individual, enabling design to become didactic. From Andy Mueller’s playful screen prints to Cody Hudson’s Constructivist-recalling designs, the works combine to illustrate the possibilities for art to literally design our communal perspective.

“Public Works,” self-described as a series of shows and events based on enriching communities through creative occupations is as clear as its mantra: “When art makes work and work makes art, everyone benefits.” With graphic design—among today’s most socially profound and prolific mediums—at the heart of “Public Works,” this exhibition holds true to its intent. Moreover, like the artists it showcases, the show simply works. (Justin Natale)