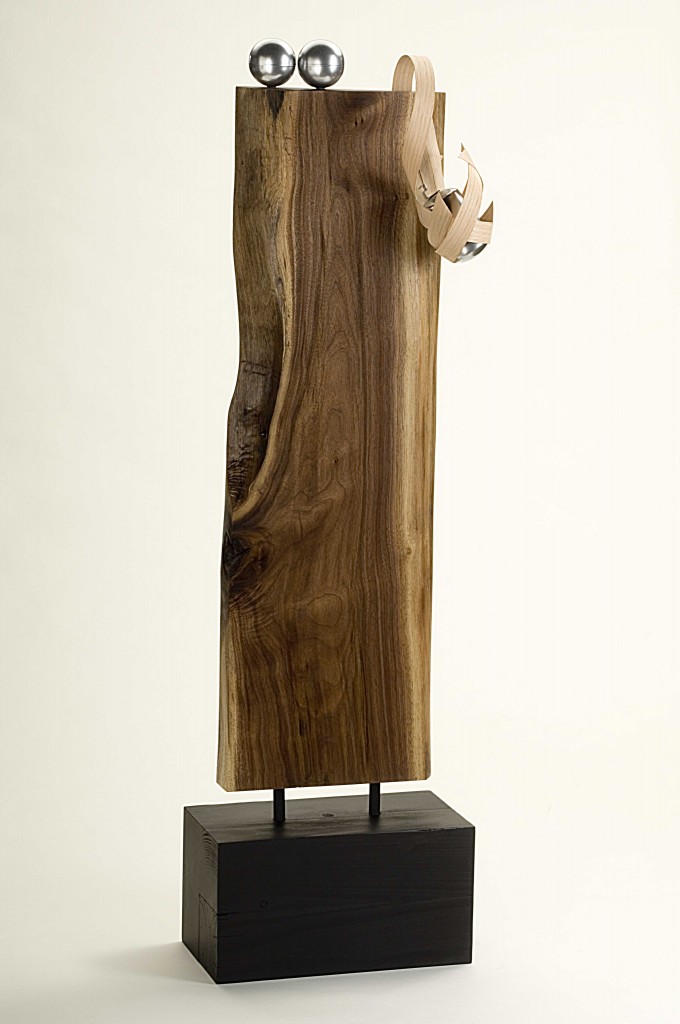 “Can nature and technology co-exist?” asked Robert Wayner in his staccato-speak. “It’s critical that we continue to explore how wild nature and technology can exist together.” With this as his magnetic north, the geologist turned musician, turned painter and sculptor, now gallery owner, has pinned his hopes on his Black Walnut Gallery where he showcases Chicago artists and his own wood sculptures. Relocated from Wicker Park to the West Loop-Fulton Market area, Wayner’s current offering is a group show titled “Closure.”

Growing up in Southern Illinois farm country in a Mennonite household, Wayner’s imagination drew him to woodworking, which “filled me with amazement,” he recalls. “The Mennonites have been in the forefront of the green movement for a while,” Wayner shares, “as well as being big in third-world relief and agrarian stewardship.” Although he admits, “I don’t think that brought me to where I’m at,” those early groundings are reflected in the flow of the two-story gallery, with its domestic, natural feel and its bundled fasces hanging by twine at points in the long throw of the place. Earlier this year Wayner presented a group show of Mennonite artists.

Wayner’s sculpture, “Nature Cradling Technology,” embodies Black Walnut Gallery’s core values. Aluminum balls perch atop sculpted wood, signifying a balance among progress and tradition, in both art and in life. Alongside naturally felled wood sculptures are some of Wayner’s colorful paintings, many dedicated to Tolstoy, whose “Confession,” says Wayner, “encapsulates the notion that we never choose who we are.”

“Closure” is an exhibition dotted with like thinkers. Painter Rex Sexton haunting “Kaddish” presents a deep blue shadowed, ghostly figure under a full, yellow moon overlooking tombstones bearing semi-faces. “I learned how to paint from a Holocaust Jew,” says Sexton. Growing up in Chicago’s Back of the Yards neighborhood, Sexton “saw hardship with no let up.” He paints “expressions of humanity with the hope that I capture its dreams in the midst of adversity.” Romanticism emerges in his stunning “Edith” oil painting. This semi-cubist portrait of Edith Piaf seduces with thick, deep layers of tans and blacks, doe eyes and arched eyebrows. It’s more Seine than stockyard.

Wayner coolly accepts the challenges of running a gallery. “I’m an artist, I had to do this,” says Wayner. “I search for truth. I didn’t have a choice,” he says with barely a shrug of the shoulders. (Jeffery McNary)