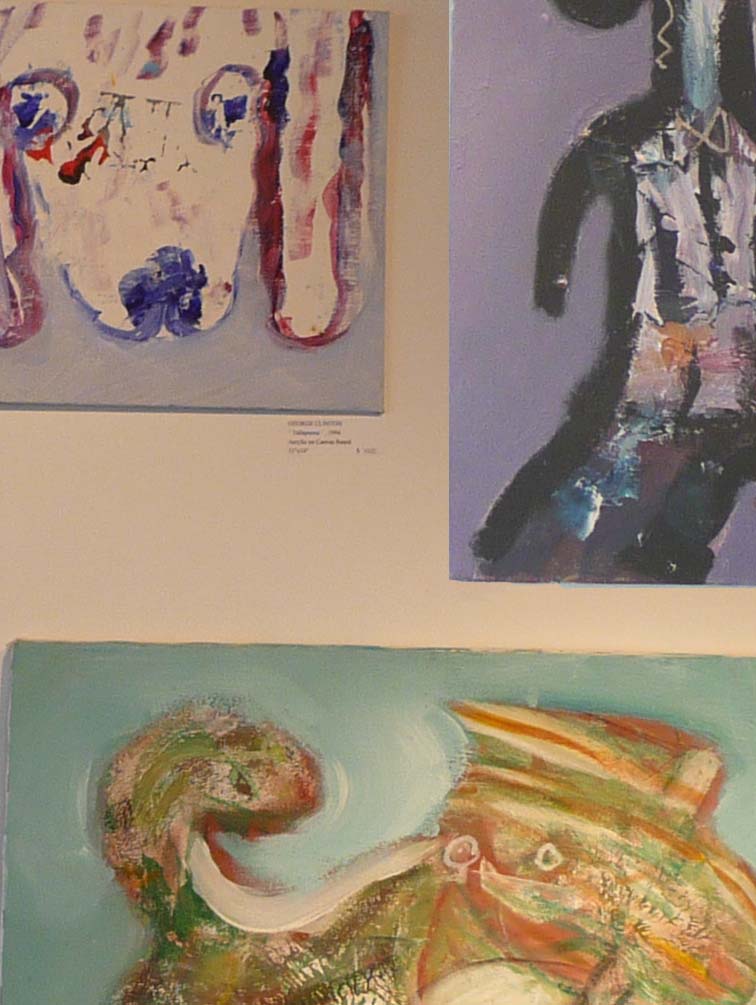 A work by George Clinton

It’s a corny name, and a goofy idea: to exhibit the art of pop-music stars who also like to paint. (Remember the infamous “Golden Throats” recordings of actors who also like to sing?) But actually, this show, tucked away behind a video-production studio in Berwyn, is pretty darn good, thanks, especially, to two remarkable characters: George Clinton (Mr. Funkadelic) and Mark Mothersbaugh, member of Devo and composer of various film scores. They both have a good sense of fun, and they’re used to entertaining people. As Clinton, a former hairdresser, recently told Spin magazine, “Painting is kind of like cutting hair. You just cut shit out until you have something.” It always seems to be party time in Clinton’s head, and his figures are loose, colorful and blurry. Mothersbaugh, however, is a bit more obsessive about his work. A former art student, he sketches a dozen or so cartoonish postcards every day, and then puts some of them through a computer to enlarge, modify and publish them. He’s so nearsighted that he’s legally blind without glasses, so his sense of space is a bit claustrophobic. But it works for him. Unfortunately, not every pop performer can successfully carry a distinctive voice over into lines and colors. Sarah McLachlan is a bit disappointing. But this exhibit also features some local artists, like Nicholas P. Decker, whose drawings on compact discs are also entertaining, even if he isn’t in the Rock and Roll Hall of Fame. (Chris Miller)

Hope you liked the work.
Thanks for coming out!
The big thing about Sarah McLachlan’s piece is this:
She use to do art, a lot. But in the early 90’s she just stopped. Stopped creating, stopped doing, and stopped showing work. So the fact that she kind of ‘came out of retirement’ and had a piece in a gallery, it was pretty big.
The owner of the gallery, James Currie, has some great ideas and has thrown together some amazing shows.
I have a feeling you’ll hear more & more about 12th Street Gallery in the coming year.
–Nick