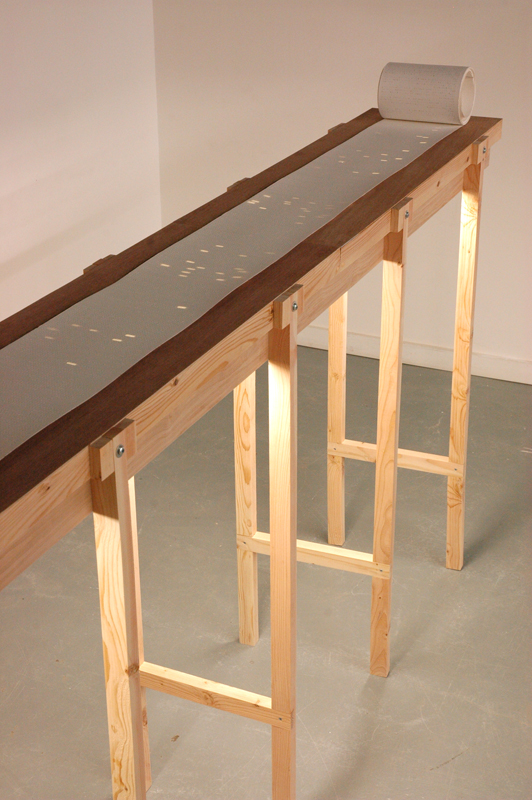 The Internet is probably the last (relatively) unexplored frontier left in our vastly over-plundered world, so it probably doesn’t hurt to search for God there too while we’re at it. Jason Ferguson has done precisely that with “Google Searching for God,” a solo exhibition that’s not really about the Internet—or God either, for that matter. Ferguson is interested in the epistemological limitations of the search itself, and has often used scientific approaches and techniques to conceptually dissect our desire to know the unknowable. In the past, he’s performed an autopsy on a La-Z-Boy recliner for the International Museum of Surgical Science, taken geological core samples of a historically noteworthy building and photographed the entire surface of a common household lamp in eighth-inch cross-sections, destroying the physical object in the process.

Ferguson’s particular brand of neo-conceptual absurdism is compelling in part because the objects resulting from his investigations are often highly sculptural in nature, and strangely beautiful to boot. Take the creamy white stream of text rolled out across the simple wood table at the center of Ferguson’s current exhibition. Evoking iconic religious documents like the Dead Sea Scrolls along with Braille bibles, the piece works perfectly well as a “standalone” sculptural object, but it’s also a performance relic referring to the artist’s offstage efforts to type out (using an inkless manual typewriter) all 450 to 490 million Web addresses that arise when Ferguson enters ”God” into Google’s search engine (a project which is, obviously, ongoing). Fluorescent lights shining upwards through tiny holes cut into the table illuminate every appearance of the word God, like a visual form of morse code. It’s a fairly obvious device, but the effect is lovely nonetheless.

Less impressive is the artist’s inclusion of two Chromira prints of the aerial topographies that turn up when Google Satellite is queried for God’s location. Although a logical extension of Ferguson’s overall project, the images are too conceptually simplistic to warrant more than a few seconds’ thought. It’s the one misstep in a body of work that otherwise succeeds at making satisfying art out of fruitless searches. (Claudine Isé)