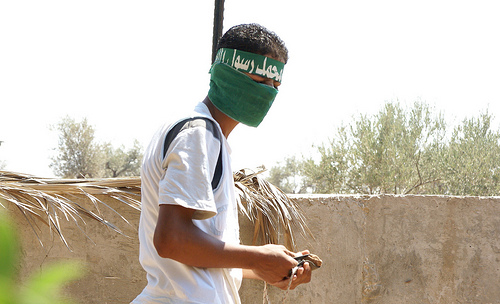 Through his day job as a TV cameraman for “docu-reality” channels like Discovery, Michael Ruggirello is able to pursue his deeper passion for depicting vignettes of larger stories in series of small still color photographs shot wherever his work takes him. While in Palestine for a war documentary, Ruggirello plunged into the heart of the “weekly riot” against the Israelis in the town of Ni-Lien, where he captured in four frames a masked resistance fighter launching a boulder from a state-of-the-art slingshot that any rude boy would die for. Ruggirello can also step back from the action to get a bigger picture, as when he shows us a pristine strand of trees, its brutal clearing by heavy machinery, and the devastation left in the wake. Ruggirello says that he wants his vest-pocket visual dramas to convey their meanings without textual embellishment; he achieves his aim admirably and, in the process, combines the meditative virtues of the still image with the impulsion of narrative. (Michael Weinstein)