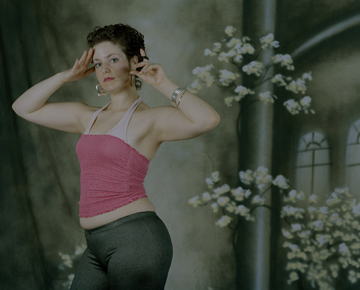 Helen Maurene Cooper, in the exhibition Faking It?

As digital cameras and their cell-phone-affixed counterparts continue to grow in ubiquity and facility, and as more and more people use these devices to transmit daily personal updates, in the form of pictures of themselves and their activities to personal Web-based facades like Flickr and Facebook, a new technologically informed obsession with personhood—either one’s own or someone else’s—dubbed “egocasting” by cultural critic Christine Rosen, has taken hold in our culture. It resonates particularly well with the young, overly self-aware members of society. An apt art theorist should remain attentive for signs of this new phenomena reemerging in the work of young contemporary artists; the lay art theorist may claim that portraiture is, by now, a pervasive and eternal tendency.

The Co-Prosperity Sphere, Bridgeport’s hip and somewhat secluded multi-purpose alt-space, recently hosted nine artists in an exclusively portrait-based exhibition titled “Transplant Reflect.” The work is unusually divided between two different approaches: technically refined photography and Pop-surrealist street art. Anna Shteynshleyger updates Man Ray’s photograms using the camera-less photographic process to capture images of individual hairstyles, suggesting that an entire personality may be reduced to the shape of a haircut.  At a moment when self-design has become the norm and conformity is unequivocally shunned, we are perhaps nothing more than our outward appearances. 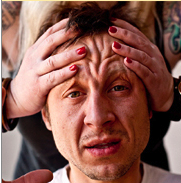 A similar group of young artists appear across town at Barbara and Barbara Gallery in Humboldt Park at the recent opening of “Pardon Me, I’m Just Not Feeling Like My Self Today.” The show gathers work by four artists attempting to survey instances in which individuals revert to their more primal tendencies. Tony Francesconi presents a compelling group of photographs featuring people in various states of mental, physical or emotional strain. “Defeated 2009,” an exemplary image, features a very unhappy gentleman receiving a very unpleasant cerebral massage from a pair of heavily tattooed female forearms.

If one assumes portraiture is simply a matter of capturing and documenting people, then Regina Mamou wishes to prove you wrong. Mamou is assembling a cast of skilled young photographers for her upcoming show titled “Faking it?” at The Art Center in Highland Park, with the explicit purpose of dismantling any claims photography may have toward objectively surveying the human subject. The work includes artists who stage or recreate moments to appear as if documenting a specific event. Jill Frank, who comes from a 12×12 show this summer at the MCA, reenacts embarrassing or odd moments from her past. “Electrocuted 2006 (When Emma was electrocuted by the horse fence)” is a particularly good example with its parenthetical subtitle leaving little need to explain what is happening to its distressed subject.

Photography is now, in the wake of the digital takeover, particularly fast and easy, but if it has any exceptional claim, whether disputable or not, to the capture and documentation of the contemporary human subject, then Rob Davis and Michael Langlois impishly seek the contrary in both topic and method. The duo will present a series of meticulously rendered graphite on paper portraits in their latest exhibition “In Our Likeness: Portraits of Illumination,” opening at Monique Meloche Gallery this week. The drawings are a fantasy-list of acquaintances culled from historic and cultural settings varying from the deserts of Mesopotamia during World War I, to the cramped stage at CBGB’s circa 1982.  In reproduction, these painstaking one-offs seem almost indistinguishable from their photographic source material. It may be easy to ‘just take a picture’—or in this case, appropriate one—but given the field of available options, for Davis and Langlois what’s currently instinctive isn’t artistically best. (Nate Lee)