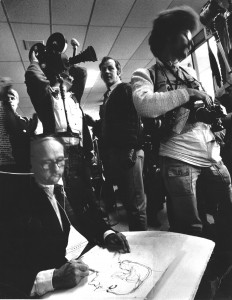 Illustration is one of the last great art forms to be recognized by the art establishment. Perhaps because it exists in service to reportage, illustration has yet to ‘come up,’ as it were. It is, however, a well-developed style with major players. At 88 years old, Franklin McMahon looms large, his legacy bundled with some of Chicago’s biggest news stories. McMahon’s realist art captures, on an epic scale, many of the significant events and figures of the past sixty years. It’s a symphony of extensive notes. In graphite, charcoal and acrylic the illustrator substantiates history, providing crisp insight into a moment’s look and feel: politicos, popes, campaigns, cardinals, courtrooms and conventions.

A selection of the artist’s drawings and paintings are currently on exhibition at the Loyola University Museum of Art, with a focus on his religious and civic contributions. Jonathan Canning, the Martin D’Arcy Curator of Art, says of McMahon’s works, “This is a lost art he’s called to. The camera is so ubiquitous we forget that such persons did such work for so very long.” McMahon has written, “The artist who draws directly on the site can see around corners, adding dimension to viewpoint, getting ideas, heightening reality.” He captures bishops in white miters entering St. Peter’s Basilica, the magnificent Baroque dome, impressive marble pillars and statues of saints about the rooftop share a harmony, as if the artist is lifted mid-way up the obelisk and the piazza’s center for a privileged glimpse of it all.

A native Chicagoan, McMahon spent a portion of his childhood in California, and there began drawing posters for school plays. Returning home, he completed studies at Fenwick Catholic High School where he began drawing cartoons, selling one to Collier’s Weekly a week before graduation. Entering the Army Air Corps during WWII, McMahon was shot down over Germany and spent four months as a POW. War’s end found him in evening studies at the School of the Art Institute of Chicago while continuing to draw freelance. There’s small wonder that sensitive mix of church and politics placed its brand upon his psyche and his creative passions. His love of the city comes through in his engaging book of drawings and paintings, “Chicago Impressions.” “My work has been half assignment, half self-initiated,” says the artist-reporter. “It’s helped that my wife is a travel writer.” 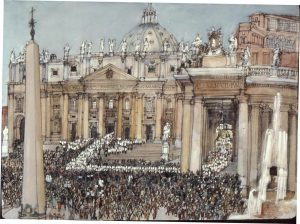 McMahon’s voluminous portfolio contains significant amounts of politically driven material. “I’m interested in capturing the atmospherics of the campaigns, rather than the candidates themselves,” he once shared relative to political coverage. “I’m in hopes those who see the drawings will get a feeling of what a guy has to go through to run for president.” He accomplishes this with images of a thoughtful Robert Kennedy, charcoal on paper, and his ‘sainted’ brother, the President with his classic hands in the suit side pockets, thumbs out. Soft circular strokes connect that President with those nearby. There’s the young “Edward Kennedy in Chicago,” acrylic watercolor, caught from off-stage. There’s Carters, Reagans, Nixons, wannabes and posses. He presents Eleanor Roosevelt, a thin-lined charcoal on paper, with hands raised as if coaxing one to, well, chill.

McMahon has also captured the darker tambour of American culture and its occasional ugly act-out. In 1955 he was contacted by Life magazine to cover the trial of those who’d brutally disfigured and murdered fifteen year-old black Emmett Till, summering in Mississippi. “Moses Wright Pointing at Defendants” hits a high point in the trial as Till’s uncle’s elongated, darkened hand points out the murderers as he speaks, “Thar he.” McMahon’s “Byron De La Beckwith Holding Gun That Shot Medgar Evers,” from 1964, details the twisted lips of the unapologetic Klansman holding a rifle in the witness chair before a Confederate flag and shadowed wall.

The artist does not hold any single project as being the most profound, adding, “They’ve all been. I’m just an innocent bystander, in the corner drawing.” Poet Robert Pinsky speaks of the Republic being “a great nation, still engaged in becoming a great people.” Should complications of karma hold that true, Franklin McMahon’s drawings provide huge doses of these ‘becomings,’ alluring us to them and holding us there.