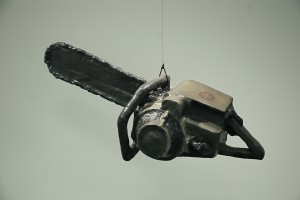 West Loop newcomer Spoke Gallery will be attempting to raise some money on September 11 by auctioning off works in a show of piñatas curated by local sculptors Matthew Dupont and Dayton Castleman. The exhibit is entitled “Objet Petit A,” a term coined by the French psychoanalyst Jacques Lacan, that refers to an object of desire that the possessor wants to destroy in the quest to attain some ineffable inner quality; in my imagination, this sentiment is also evocative of galleries too in love with their integrity to trouble themselves with financial solvency, a trap Spoke is wisely seeking to avoid. Every auction winner on Friday will face the dilemma of having her cake versus eating it—either smashing her piñata, or leaving it and its inner mystery frustratingly intact.  Items up for bid include a giant nose courtesy of Ben Fain, an origami-esque creation by Harriet Salmon, a chainsaw by Michael James McKean, or an orb from Tomas Moreno that sports a portrait of Abraham Lincoln. Proceeds from the auction go to benefit the gallery, as well as Chicago Rarities Orchard Project, “an organization founded to establish community rare-fruit orchards in Chicago.” (Bert Stabler)