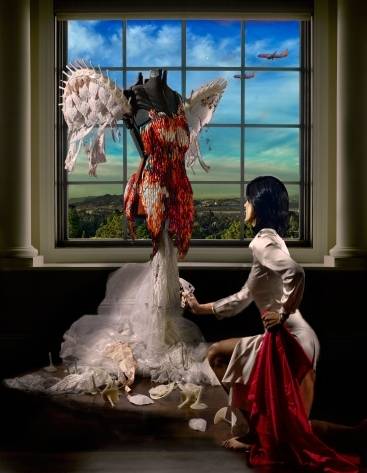 In a brilliant postmodern paean to classical modern painting, Crisanta de Guzman creates searing surrealistic color scenario photographs in the computer from her own shots and appropriated photographic images, and then hypes them up to produce seamless ultra-graphic brightly-colored simulations in the styles of the old masters set in contemporary times. Guzman’s photo-works are imbued with an impressive range of deep-cutting meanings; each of them evinces its concept stunningly, as in “Overhang,” in which we see, from behind, an unsuspecting girl walking down a sunny suburban street as a tornado of detritus, including an SUV, a house for sale, and bird-like and leaf-like shards (actually “folded fake million dollar bills”), descends on her, perhaps to sweep her up into it. With a nod to “The Wizard of Oz,” Guzman observes: “We’re not in Kansas anymore.” The loss of innocence and its inevitability haunt Guzman, giving her still dramas poignancy, as in “Icarus’ Sister” where the subject kneels before a tattered dress with wings that is bedecked with orange and red feathers and is mounted on a headless dressmaker’s mannequin, as jumbo airliners soar effortlessly through the sky outside a window. (Michael Weinstein)

Through October 10 at Woman Made Gallery, 685 N. Milwaukee Ave.