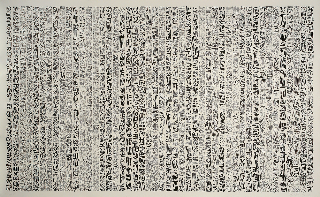 For an artist whose name roughly translates from the German as “the color of the heavens,” there isn’t much color in John Himmelfarb’s exhibition at Finestra Art Space. Himmelfarb’s mostly black-and-white drawings are primarily about texture, both of the textual and implied variety. The major work in the show is a large ink drawing on paper titled “Protest.” The work is comprised of vertical rows of darkly inked quasi-symbolic, pictographic marks. The gestures in Himmelfarb’s “writing without words” are a series of improvised calligraphic strokes that never rise to the level of legibility. Instead, half-formed images appear and disappear as one reads up and down the row. Other smaller works on paper accompany the much larger “Protest.” In the etchings “Plot Outline” and “Night Life,” layers of delicate lines lay in piles contained within sectioned grids. Each square of the grid is darkened by an accumulation of meandering lines. Taken together they resemble dimly lit waves or folds of fabric. The imagery in the works hearkens back to the beginnings of modernism and its embrace of “primitive” symbol systems. As well-crafted and thought-out as these works are, they would be better served if Himmelfarb’s historical influences were mitigated by some contemporary element. There simply isn’t much necessity nowadays for an illegible protest, especially one so informed by the past. (Dan Gunn)