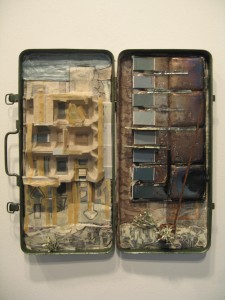 “Cabrini Green is beautiful,” the man in the film proudly declares, standing in front of a chain-link fence and graffiti-covered wall. And to him and many of the former Cabrini tenants, this seemingly contradictory statement is true. Michele Stutts captures their testimonials in a forty-five minute documentary. Juxtaposed against ten mixed-media pieces, the result is more reactionary than activist. The show serves as a frank record of the tenants’ personal loss of home and identity after the ten-year-long Cabrini transformation project that has forced tenants to relocate in an effort to create a new, safer, mixed-income neighborhood. The emotionally charged interviews, presented in informal dialogues in the tenants’ former homes, are contrasted against the mixed-media pieces’ visual depictions of the demolition. The former presents individual perspectives, while the latter treats Cabrini as a whole. Individual identities are lost in the abstracted depictions of the familiar red brickwork layered with blueprints, coin rubbings, and shredded dollar bills, a commentary on the Chicago Housing Authority’s long, strained relationship with the Cabrini project. More conceptually complex are Stutts’ found-object pieces. The objects’ tactility is further enhanced by their deterioration—a frayed, dirty fabric piece is woven around a rusty rake top—and they appear as if they could be the surviving remnants from the demolition’s aftermath. The contrasting textures careful compositions import a reverence for the discarded objects—the same reverence Cabrini community holds for their former home, no matter how infamous. (Patrice Connelly)