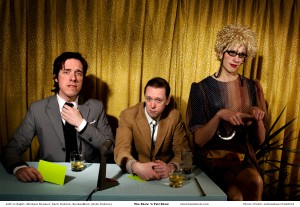 My drink leaves a moisture ring on Schubas wood floor. It’s Sunday night, and the cream of Chicago’s creative crop mingle around me. Boys with glasses far exceed those without; the beard-to-clean-shaven ratio is equally disproportionate. It’s a packed house, populated with the sort of people who burst into laughter when guest Davey Sommers of ColourLovers.com makes a joke about Rotoscoping and Roto-“tilling.”

It is the “The Show ‘n Tell Show,” a late-night-style talk show featuring the city’s most dynamic illustrators, designers, cartoonists, poster-makers and photographers. Co-host Michael Renaud says it is an exciting time to be a graphic designer in Chicago; there’s a centralized creative community of studios doing mind-blowing work… a fact most non-designers are unaware of. The “Show” hopes to bridge that gap and bring design work to the masses.

“Conferences and panels are informative, but designers tend to take themselves too seriously,” says Renaud, of Mr. Design Company. “It takes the piss out of people. So our show’s a bit of a roast.”

Renaud and co-host Zach Dodson of featherproof books provide guests with an arsenal of questions about their latest projects, while SpokesMom, the “spokesmodel who is also your mom,” portrayed by improviser Seth Dodson, offers comic relief and keeps guests from spiraling into self-indulgence.

Highlights from Sunday’s show include a very pixilated Skype interview from Flatstock Seattle with Billy Bauman of Delicious Design League. (“I’ll show you guys the Space Needle, to prove this isn’t some elaborate ruse,” he says.) Mig Reyes explains the difficulties of photographing real yawns for his coffee-table-book-in-progress, “The Really Great Yawn Book,” while Ivan Brunetti pontificates about debauchery, his latest New Yorker cover and why Las Vegas is “the most horrible city I’ve ever been to in my life.”

These are people who doodle in the margins of newspapers, who carry around little black Moleskin journals, who (I learn) spend an awful lot of their creative time hanging out in bars.

“Zach and I were getting very drunk at a bar,” says Renaud, explaining how he and Dodson came up with the idea for the “Show.” Likewise, Jeremiah Chiu and Renata Graw, the graphic-design duo from Plural, spent several nights tipping back beers at The Whistler while brainstorming ideas for the hipster hub’s new window installation.

During one of many show’s many breaks between guests, Renaud announces a “public service announcement” on behalf of a local wine shop, the Noble Grape. “It’s a really great store, but their sign is really terrible; I don’t think the word grape looks enough like the word grape,” says Renaud, punctuating this phrase with a photograph of the shop’s unfortunately designed logo featuring a nearly invisible G.

“See, this is why designers are important.” (Laura Hawbaker)