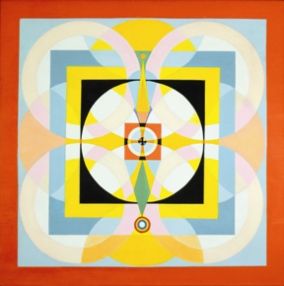 There was an optimistic, meditative spirituality in abstract painting when it emerged in early-twentieth-century Europe, and this exhibit presents three American abstract painters who kept going in that direction even after the postwar New York art world had turned more worldly, angst-ridden and expressive. Each has filled their work with references to various non-Western mystical traditions, but though they seem like repositories of ancient, esoteric knowledge, that knowledge remains strictly personal (i.e., nobody can figure it all out). Charmion von Wiegand (1896-1983) began as a devotee of Piet Mondrian, and it’s fascinating to see her change into a Himalayan Buddhist. You can actually see the Mondrian in her gradually fleeing the canvas. She is the one painter in this exhibit whose work belongs in a remote monastery (or, at least a fashionable spiritual retreat center). Alfred Jensen (1903-1981), though, with his thick paint, compulsive numerology, aggressive colors and rough edges, was apparently a much more earthbound, suffering soul. Simon Gouverneur (1934-1990) was more concerned with himself as a contemporary artist, producing well-crafted, apparently complex examples for Nelson Goodman’s  “The Languages of Art.”  The three make for a fascinating contrast, and transform the exhibition space into a temporary chapel of post-Christian spirituality and art posturing. (Chris Miller)

Through November 15 at the Loyola University Museum of Art, 820 N. Michiga.