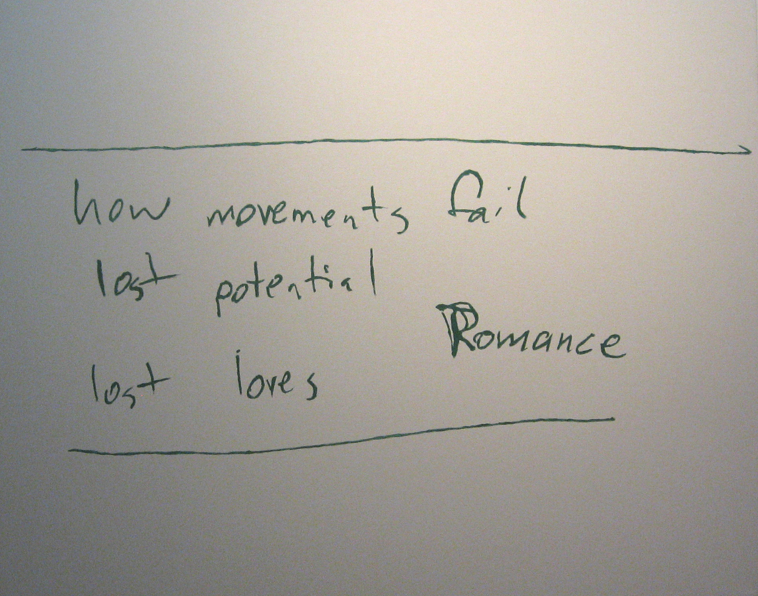 The tagline for Phillip von Zweck’s new solo exhibition at Three Walls, “The First Anniversary of the Fortieth Anniversary of May ’68 (in September),” is: “This show is a happy return to a way of working, a way of being an artist shelved a long time ago.” For von Zweck, this means a return to painting, a medium abandoned by the artist fifteen years ago and one of the most melancholy in the history of art. The “death of painting,” announced and renounced throughout the twentieth century, certainly shares the dynamic of deferral that haunts the political and historical events of May 1968. Yet the title itself seems to underline the probable failure of this reactionary turn, its disavowals and its latent conservatism. Von Zweck’s paintings, some abstract, one of a seal in the snow, another of an older man, mix with a few didactic pieces, such as a board with the following scrawled inscription, “How movements fail / lost potential / Romance / lost loves,” that calls further attention to a pervasive attitude of disappointment. Rather than some triumphant return to a way of working that reinstates the primacy of both the art object and the artist, von Zweck’s new paintings function as a eulogy for another (more radical? more optimistic?) body of work. Meant as a “corrective” gesture to his earlier, more conceptual style, The First Anniversary’s collection of traditional artworks reveals the hesitancy of a vulnerable artist reconsidering the legacy of his past insubordinations.  (Rachel Furnari)