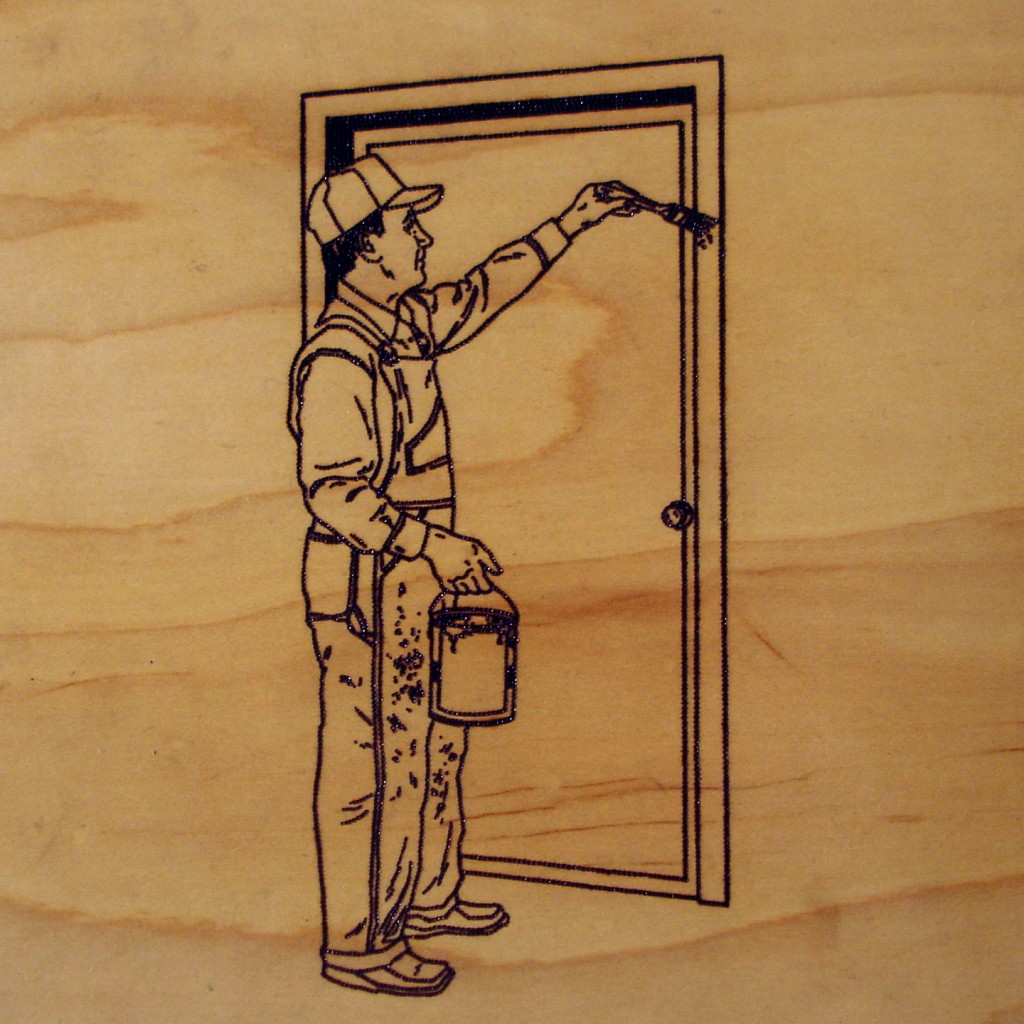 “I guarantee you, somebody will get lost.” It is Saturday evening and, as I stand on the platform at the Belmont station, a CTA employee with a sense of humor boisterously informs people of re-routed station arrivals. Trains of all colors and directions converge on just one platform. It shouldn’t be so difficult, but as I look around, hedging my bets on who I believe most likely to take the wrong train, the dual meanings of ‘get lost’ seem, for the first time, equally accessible.

Somewhere between a four-course meal and the Belmont disarray was “GroupSOLO,” at Swimming Pool Project Space, a rotation of four exhibitions within a single gallery, each lasting just one hour. In between acts the curtain did not drop and the house lights did not dim. Two preparators employed by the Art Institute of Chicago, Aza Quinn-Brauner and Daniel Baird, brought their gear in full view. Any notion of the pristine white -cube gallery—though it barely exists in the blue-painted Pool—was totally dismantled. If you’ve ever shown art in any type of gallery at any point in your career, you know that it always seems to come down to the last minute. In “GroupSOLO,” there were four of these.

The first rotation included a single painting by Tom Long. A ladder, a paint can, a drop cloth and tools also occupied prime real estate in the gallery. At 8pm sharp the two preparators performed the quick change. Pedestals were constructed and painted and TVs were installed while a small group of observers gathered along the gallery’s perimeter. This was to be the evening’s “performance installation.” Preparators are like carpenters with a PhD in art miracles. Installation isn’t always as simple as hanging up a painting with a nail. There’s always a problem in need of a solution. Many preparators are also artists, which is fulfilling since there’s a lot of handiwork. They’re usually the only ones to touch the art after it has left an artist’s studio. They’re the exhibition’s unsung heroes.

Diego Leclery’s “Crazy/Baby/Idiot,” a multimedia exhibition of incongruently timed loops playing on an adjacent television, went up. Channeling inspiration from Bruce Nauman, the artist unleashed a series of aggressive accusations pertaining to insanity, childishness and stupidity, respectively. Appearing physically different on each monitor, the artist’s abrasive, second-person interrogations lent a visual counterpart to what voices in one’s head must sound like. Whether abusive, self-reflective, or both, the repetition of questions like, “What are you—crazy?” led to moments of true consideration of my own sanity.

One-night-only exhibitions are the new performance art. If no one attends the show, then does the show really exist? “GroupSOLO” wasn’t turning out to be a wine-and-cheese, see-and-be-seen affair. A core group of observers were making the gallery home for the evening, which created a kind of solidarity, whether expressed or implied.

At the evening’s midpoint, and with the white paint barely dry, the preparators removed the pedestals they created just minutes before. The show’s attendance blossomed into a small crowd, and Swimming Pool Project Space owner Liz Nielsen assisted the preparators in hanging the final two artists of the evening—Carol Jackson’s sheet-music series and Jeffrey Grauel’s “Always” and “Forever” series of burned maple plywood squares. Notably, “Forever”—an illustrated series of sixteen men in the midst of their day jobs, from butcher to bricklayer—both underscored and literalized the gallery’s labor-as-art theme of the evening.

The four-fold costume changes complete and the performance over, I walked back to the train. I began to wonder if the performance I had witnessed, a microcosm of a gallery season on fast-forward, was the art world equivalent of a barn raising. All together now.