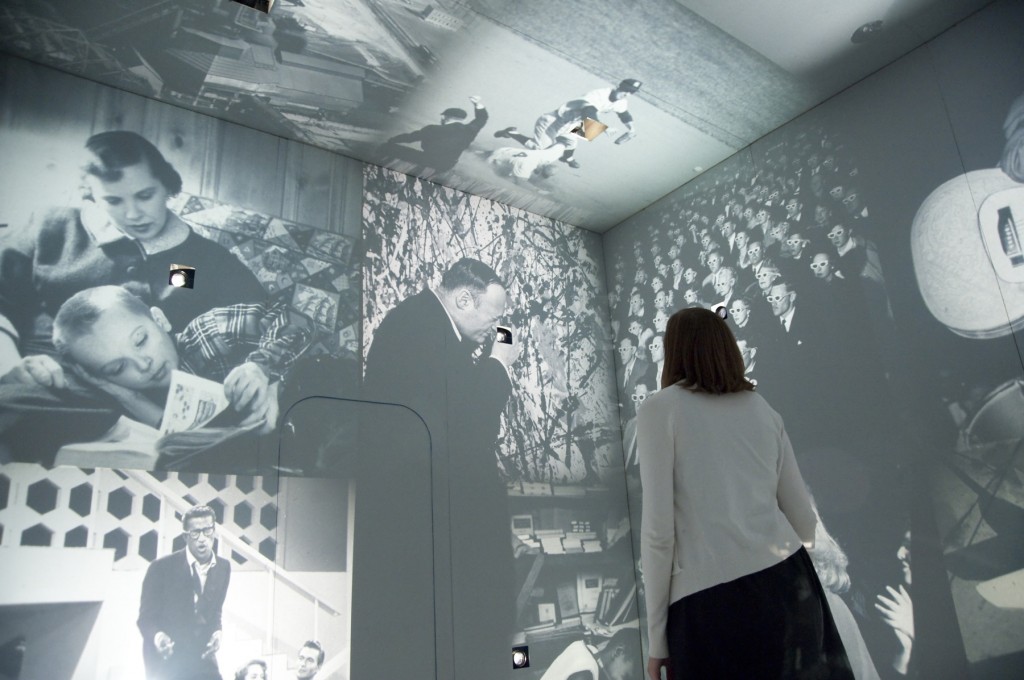 Inside the "Knowledge Box" by Ken Isaacs

It’s telling that no paintings are included in “Learning Modern,” an exhibition conceived to honor and update the twentieth century’s greatest artistic project. Modernism bloomed on canvas, its essences distilled via paint. But any office worker in downtown Chicago knows that Modernism also found expression in concrete, steel and glass. Despite its force and thrust, Modernism was (and remains) people friendly. It’s interactive. By inhabiting Modernist structures we carry its legacy, and we can barely ignore it; we can, however, shelve a crackly old canvas out of view. The persistence, and insistence, of Modern architecture may be one reason why painting was excluded from “Learning Modern.” Another reason may be that Wellington Reiter is an architect and urban planner, and the current president of the School of the Art Institute of Chicago where “Learning Modern” is held. For Reiter, renewed attention to architecture and design signals a reorientation of the artist’s role in the world. Whereas painters work in private, their coded dialogue trained toward other painters, architects and designers mold human activity. Being relevant is back in style. It’s an ideal even the classical Modernists would abide.

As any showroom of power ought to, “Learning Modern” inspires awe. Technology and installation art collide in ways that announce, yes, we are living in the promised future. Okay, maybe war and poverty and pollution aren’t resolved here, but who said the future wouldn’t also be entertaining? Invigorated curiosity about the world may be a step in the right direction. This vast playground on the seventh floor of Louis Sullivan’s rehabbed masterpiece (formerly Carson’s department store) presents a philosophy about better living through art so totalizing it could be called the 2009 World’s Columbian Exposition.

In 2005, Mies van der Rohe’s grandson took a hammer and smashed a window in his grandfather’s iconic Modernist structure, Crown Hall, thereby initiating the building’s renovation project. Artist Iñigo Manglano-Ovalle presents video documentation of the Oedipal scene, tightening his focus on the shimmering, shattered glass and the participants’ shiny patent-leather dress shoes. In slow motion, with sounds extended into deep, grumbling effects, the minor ceremony is warped into a traumatic episode. Sometimes tradition needs to be broken, its assertive perfection met with violence, even if only in fantasy—Crown Hall has since been restored to glory.

Elsewhere in the exhibition are displays of Charles Harrison’s product designs from his years at Sears Roebuck, including viewfinders and a sewing machine. The SAIC alum (1954) brought Modern design into the hands American consumers even if they didn’t realize it. There’s a display of Claire McCardell’s women’s wear for the practical and beautiful housewife. There’s a hanging garden—Babylon redux. There’s a bright red jumpsuit by Frau Fiber hanging on a wall, symbolically trading Joseph Beuys’ tired gray wool suit for Laszlo Moholoy-Nagy’s work ethic. One step back, two steps forward. And then there’s the “Knowledge Box,” called the “Think Box” when it was first assembled in 1962 at IIT. Inside, viewers are bombarded with sounds and images from mid-century history. The “experimental learning chamber,” constructed from an intricate dance of slide projectors, mirrors, and a radio frequency-transmitted soundtrack, is supposed to “bring about a social awareness.” The time machine reeks of a 1960s conception of “the virtual,” as if an abundance of technology could ripen utopia. As Chicago’s dominant art institution purports a bigger, better today-for-tomorrow, is everyone falling in line? “Formalist fuck-ups,” begins the exhibition statement for “Double Dutch” at Scott Projects. “Molesting the Post-structuralists. Heaving up conceptualism.” A pantheon of Modernists is defiled: John Cageless. Clement SmokeGreenberg. Off Kawara. Yoko NoNo. In the actual exhibition space, collaborative work by Liam Crockard, Ben Schumacher and Hugh Scott-Douglas coyly resists art history. Like SAIC’s “Knowledge Box,” someone here got hold of those picturesque Time-Life encyclopedias, and collages blossomed. A shelf from IKEA, reminiscent of a Minimalist sculpture, was shrink-wrapped with an iPhone playing instructions for the shelf’s construction, smartly updating Robert Morris’ “Box with the sound of its own making,” from 1961.

In Humboldt Park, an apartment gallery called MVSEVM opened a group show titled “Exhibition 1.9262009.” The space’s proprietors are clearly having fun with the alternative method: the Greco-Roman “V” and mock acquisition number irreverently jab at institutionalism, as if to build their own Modern Wing. Their first exhibition is a good start. Within a permanent cabinet-as-exhibition-space are Jennifer Lambert’s curios, bizarro but careful found-object sculptures, and the hallway serves as a black box for video. Like any sufficient museum, donors are needed. Here, a seven-foot-tall donation box asks visitors to make the difficult leap and deposit some change.

At Linda Warren Gallery, SAIC professor Don Southard exhibits classic Cubist portraits and tabletops in a medium handled deftly by Picasso himself: cardboard. Southard’s updates, while pretty, are for nostalgia’s sake only. Where Modernists favored hardcore originality (and everything the word “modern” implies), today Modernism is a decorative element, like realism or Renaissance. Rescue its spirit from the dustbin of history, says the “Learning Modern” exhibition. Neo-Modernists won’t find usefulness in painting—an obsolete technology. Usefulness, resourcefulness, progress, change—grab your jet pack, Modernism waits for no one.