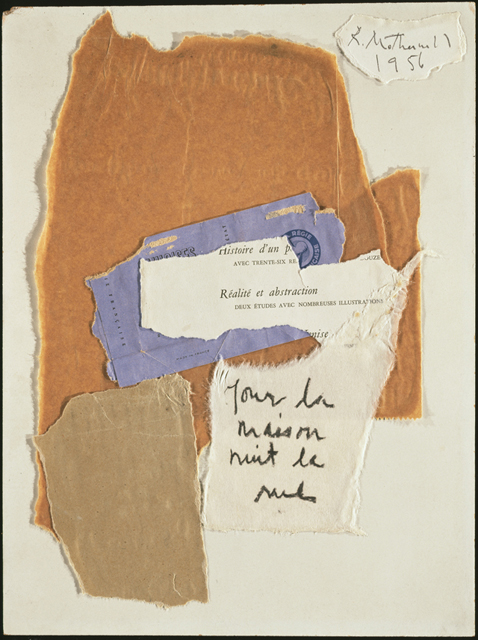 Boasting one of the most comprehensive collections of Robert Motherwell’s graphic works in the world, the Walker Art Center is an important resource not only for Motherwell’s editioned prints but for the study of the New York School painter’s entire oeuvre, which spanned hundreds of lithographs, screenprints, collages, drawings and artist’s books and, of course, iconic paintings. This representative sampling of more than forty works on view in “Robert Motherwell: An Attitude Toward Reality,” an exhibition organized by the Walker and drawn exclusively from its own holdings, provides a well-focused overview of the artist’s career with a particular focus on his prints, drawings and collage works.

Motherwell’s study of psychoanalysis, psychic automatism, Carl Jung’s theories of unconscious creativity and the principles of Zen Buddhism, among numerous other areas of interest, led him to view abstraction and reality as a spectrum. The artist plumbed the material world and the subconscious alike for inspiration, extracting key gestures from both that helped him hone in on an individual style. Motherwell’s series of spare red pencil automatic drawings is but one example of how he used automatism to unearth a core gestural vocabulary from “the preconscious” mind, while another, more uncompromising approach to automatic techniques is seen in his exquisite “Lyric Suite” from 1965, a series of several hundred ink-on-Japanese-paper drawings executed one after the other without pause or subsequent alteration. Motherwell’s incorporation of bohemian detritus into collages and lithographs enabled him to tap into another type of reality, the sheet music, cigarette packages and wine labels he favored providing a fundamentally different yet equally powerful vehicle of self-expression.

Also included are selections from Motherwell’s “Africa Suite” and the “Open” works, several “Elegy Studies” and the painting “Elegy to the Spanish Republic #167 (Spanish Earth Elegy)” from 1985. “An Attitude Toward Reality” ultimately functions better as a teaching tool than it does a catalyst for fresh thinking on the subject of Motherwell, yet given the Block Museum’s ongoing focus on prints and other reproducible art forms (coupled with its lack of significant Motherwell holdings) its presentation here is a perfect fit. (Claudine Isé)