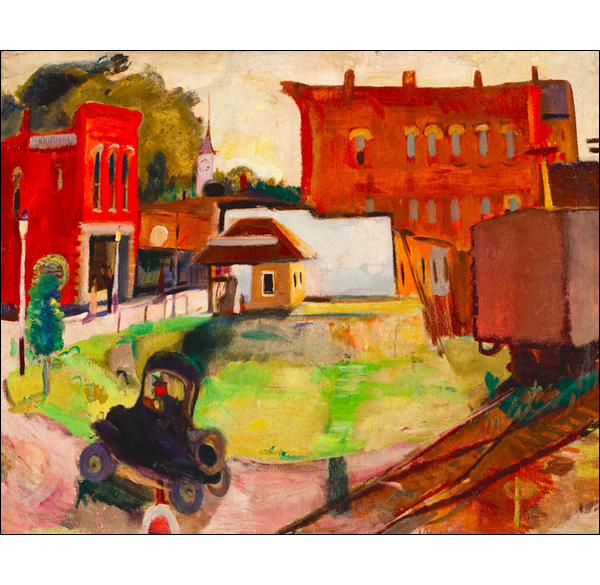 Entering a Francis Chapin exhibition is like walking into a cocktail party where the guests are loud, chatty, well-dressed and just a little tipsy. If the location were New York, the woozy chatter would be about the latest shrink, but since this is Chicago, it’s about boats or vacation homes in Saugatuck. So there’s lot of energy and excitement about the world—even if the painting depicts the hulk of a derelict warehouse looming against the ‘L’ tracks. Chapin (1899-1965) was a small-town Ohio boy who liked modern urban life and, centering that life at the corner of Michigan and Adams, he had a twenty-year career teaching lithography at the Art Institute, while making quick, expressive oil and watercolor paintings of the busy world around him that included Chicago and the various artist colonies where he taught over the summer. Making more of them than he could sell, a few dozen were boxed up with the estate, and only now are making their first public appearance. It’s an assortment that spans four decades of the painter’s life, from the lonely figures of the 1920s and thirties to postcard views of Chicago landmarks in the fifties. In between are some excited, very colorful moments of the lively twentieth-century Chicago—especially around trains, switch yards and bridges. Chapin loved trains with the big-eyed wonder of a boy. (Chris Miller)