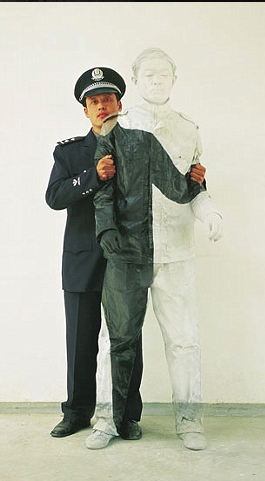 Proving, if that needs to be done after scores of examples, that Chinese photography is today’s avant-garde, performance artist Liu Bolin has himself painted, places himself in cityscapes where he nearly “disappears,” and then has an assistant shoot him in color, faded into the environment. Bolin’s ghostly presence haunts the drainage pipes, propaganda posters, stockade fences, public buildings, and construction sites with which he chooses to fuse, always standing stoically expressionless to drive home a reminder that the individual is still standing despite the overwhelming onslaught of (post)modern life. Nowhere does Bolin achieve his concept more perfectly than in his “Provisional Wall,” where his spectral figure ethereally fills a narrow opening in a stockade fence that is foregrounded by unkempt vegetation and bald dirt patches; above and behind the fence, modern towers rise, bathed in a haze, as though they belonged to a fantasy city that denies the disordered reality that artifice will never tame, and the flesh-and-blood human being who has not yet been effaced. (Michael Weinstein)