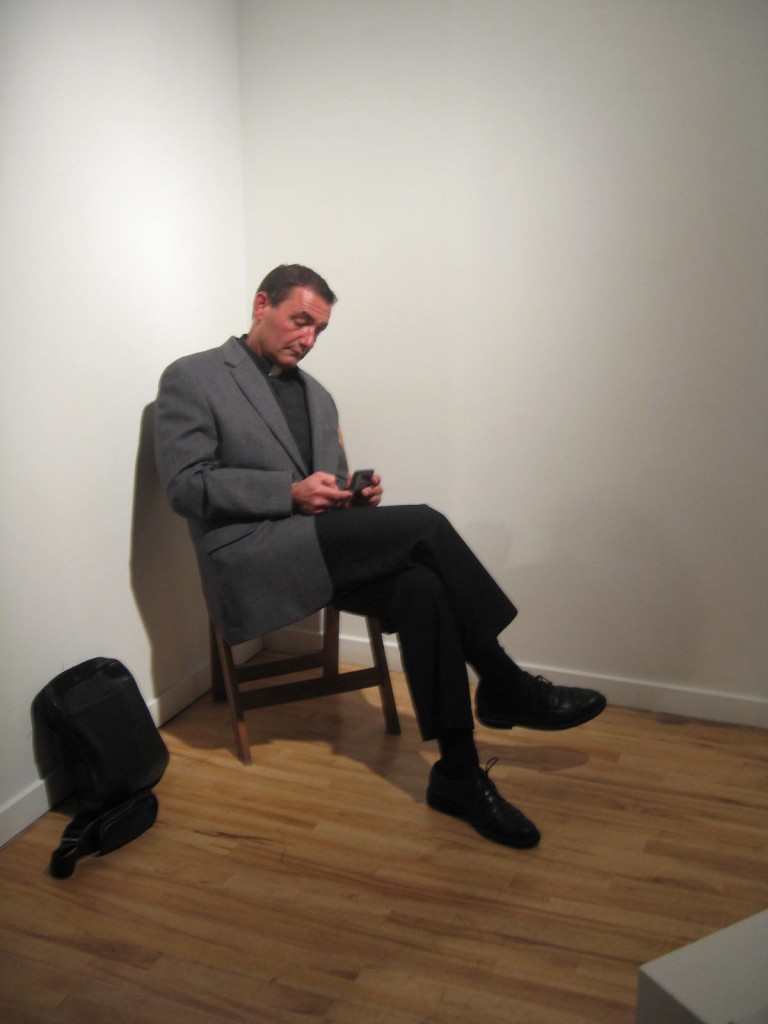 Everyone knows that a verb is an action word. To paint or to cook, for example. Artistic interpretations thereof are slightly more complex. Is it possible to express “walk” through singing, or exemplify “ask” through texting? Can an action like “invite” be conveyed through a static medium, like a painting? If so, are the unrelated actions tied together? These were some of the questions raised during Industry of the Ordinary’s performance, titled “39 Verbs.”

The Chicago-based art collaborative compiled a list of thirty-nine verbs from the online descriptions of their projects over the past five years. They then invited cultural workers such as artists, curators and critics to create artwork based on the randomly assigned verbs. For one night only, the thirty-nine works, including painting, video, installation and performance, packed into the Packer Schopf Gallery and competed with one another for visitors’ attention, resulting in an over-stimulating environment.

Many pieces invited audience participation, such as Anna Kunz’ Host (esss). Kunz toured the gallery asking participants to wear one of her mixed-media collaged “parasites.” In this way Kunz and the viewers fulfilled host-related roles; Kunz as a hostess bestowing gifts on gallery goers, who in turn become a crowd of hosts. Kunz was personally very pleased with her verb assignment, feeling that it fitted well with her work. Other artists had more difficulty with their assigned verbs.

Jeanne Dunning was first disappointed when she received “Solicit.” It was only through verbalizing her frustration to others that she came up with her concept for her piece. Dunning found that she, as well as the majority of her acquaintances, associated the verb with prostitution. Dunning chose to embrace the association, and solicited sex workers to attend the event and interact with gallery goers in “whatever way made sense to them.” The viewers, informed about the sex workers’ presence without specific introductions, couldn’t help but make their own assumptions about fellow gallery goers.

Dunning’s wasn’t the only piece that indirectly forced viewers to question their preconceptions about one another. Jay Wolke’s “Hand” encouraged viewers to pick cards with phrases in different languages and seek out possible translators in the crowd (during which they would hand their card to one another). After first determining the language on their card, viewers would approach those whom they believed to be able to translate. Some “translators” found themselves uncomfortable with being stereotyped, and expressed their discomfort to the artist. This reinforced the piece’s success; the viewers’ uneasiness was indirectly caused by the action associated with the assigned verb. “Hand,” along with many of the other pieces, served as a reminder that a seemingly harmless action can have the most influential consequences. (Patrice Connelly)