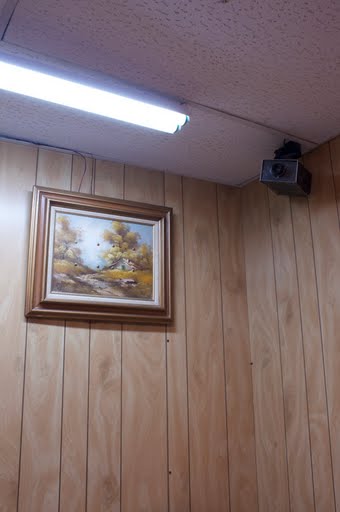 Inside "Stolen" at Garage Spaces

In the typical scheme of urban gentrification, artists stake out cheap studio space in a so-called bad area, then comes the wave of galleries, condos and boutiques, and voilà, a neighborhood is transformed (to oversimplify the matter). Sometimes, though, this process is reversed. As the economy slips and strong commercial centers lose their tenants, vacancies are produced faster than trinkets from China can fill them, and we end up with ruins in the city center. That’s when the artists move back in.

The John Hancock Tower is an unexpected home for one such creative re-use of a ruin. Here, on the twenty-fourth floor in this monument to corporate progress, artist Jan Tichy transforms about a third of a vacated 33,000 square-foot office suite into a sprawling exhibition of video installations. At the elevator’s ding, its doors open to lights out and the low hum of a machine. The carpet has been torn out to reveal concrete, but the walls of private offices and conference rooms, previously home to headset-yapping VPs, remain like ghosts. These rooms are lit only by the glow emanating from Tichy’s projectors and television sets, maximizing the haunted house effect as viewers wander the empty offices.

It also feels devilishly enthralling, as if the light from Tichy’s works were a helicopter searchlight shining into your illicit party. It’s entertaining, but hardly illegal. The production is sponsored by Richard Gray Gallery, located one floor above, which seems to be surviving, and mining, the economic downturn with aplomb. Despite the immersive environment, though, Tichy’s strength is his use of subtlety. The videos and projections are not shocking or loud; even a three-minute video requires patience to fully reveal itself. At heart, Tichy is a formalist who captures the way lighting effects change or reveal architecture. Looking out one of the tower’s irregular geometric windows onto a creeping sunset over the city, it becomes clear that this opportunity enabled Tichy, who’s had smaller shows around town, to fully realize his potential. Funny, though, that it took someone else’s despair to complete another’s dream.

Speaking of busted dreams, a pawnshop has opened in Mike Bancroft’s converted garage behind his Humboldt Park home. Outfitted with fake wood-paneling, rancid fluorescent lighting, a security camera, two-way mirrors, dusty goods and a mock meth lab, the shop is a convincing parody of twenty-first century ills. Some of the wares typify broken dreams: electronics, a gun, musical instruments, a moped, a fur coat. Others are more idiosyncratic, including rocks from Spiral Jetty, a pelted Furby toy, and a talking painting. All the goods are supplied by artists, and all are “stolen” in some way, from family and friends, or from the streets of Chicago. 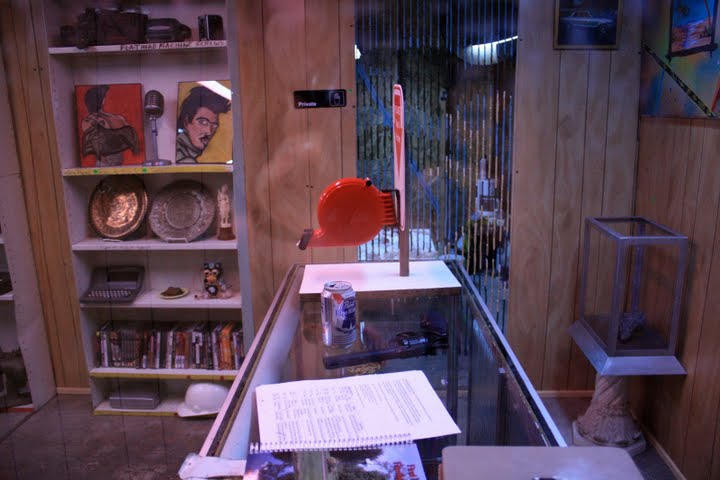 Inside "Stolen" at Garage Spaces

Titled “Stolen,” the pawnshop highlights thievery’s manifold paths. One undercurrent concerns the legal rights of artists who appropriate copyrighted materials. So, there’s a stack of unlawfully distributed photocopies of ArtForum magazine and unlicensed reproductions of Josh Hartnett—all cute and smart but not liable to get anyone busted by the copyright police. Bancroft’s own beef is with artist Shepard Fairey, though. Fairey’s court drama has been well covered, from the Associated Press suing his use of their Obama image, to his museum exhibition incorporating appropriated images, to Fairey’s own hypocritical lawsuits against other artists repurposing his art. What a mess. This summer Bancroft visited Fairey’s museum exhibition in Boston and took illegal photos of the work inside the show, inspired by the market in handheld video recordings of still-in-theater movies, and attempted to sell the stolen images at a lemonade stand outside the museum. They are also available for purchase at the pawnshop.

The Fairey legal drama has run its course, says Bancroft, but he seems to be inviting a raid, not only with the Fairey stuff but also by hawking stolen goods. It’s difficult to tell if the threat of prosecution is real. Most of the goods are next to valueless, the meth lab is missing a few key ingredients, and Humboldt Park cops have worse things to worry about.

It would be easy to disregard the installation, clever as it may be, as just another safe critique of consumer culture, but knowing Bancroft’s history warrants a deeper look. With the opening of his Garage Spaces and as the founder of Co-op Image, an extracurricular arts program for children with limited resources, Bancroft is now a proponent for two of Chicago’s beloved institutions: its profuse alternative arts venues and its prolific community art activism projects. Both practices routinely thwart criticism, as they can seemingly do no wrong—but they do. Alt-spaces often sidestep quality in favor of inclusiveness, and activist projects can be money pits. Bancroft’s pawnshop, in turn, dramatizes these failures. It questions the efficacy of art placed in the service of real community change. Ultimately, many such efforts end up in the junkshop’s discount bin—perhaps fodder for another artistic rebirth.