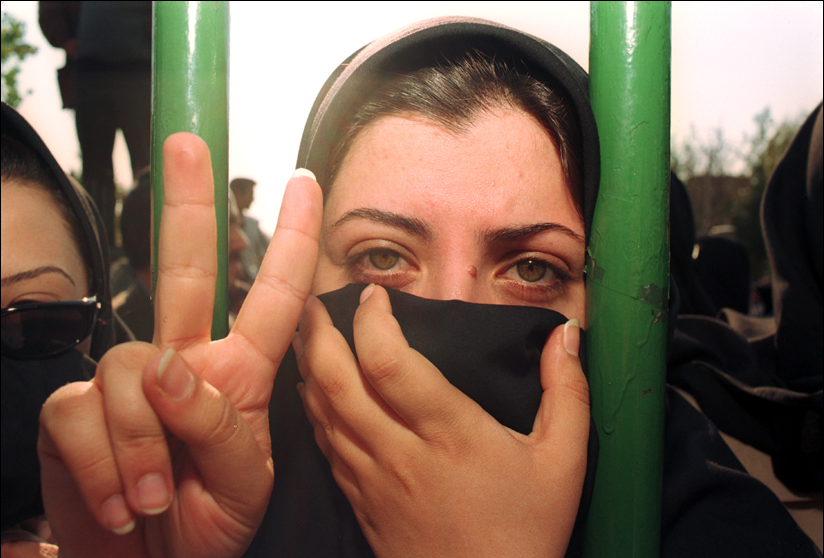 Be prepared for the shock of your political life when you glom on to the photos of the nine feisty conceptual and documentary Iranian shooters who are wilder and woollier than any but the Chinese could hope to be. Did you know that more sex-change operations are done in Iran each year than anywhere else but Thailand? Newsha Tavakolian shows us the life of “Maria,” once a male truck driver and now a beefy coffee-shop waitress. Are you looking for women in uniform? You will be blown away when you see the female cops in Tehran captured by Abbas Kowsare who are dressed in black chadours and point their assault rifles in your face. Is postmodern cultural criticism to your taste? Farhan Moshiri and Shirin Allabadi trump Ad Busters in their “Operation Supermarket” series, in which they let us feast our eyes on their “Hejab Barbie Wooo.” Not to mention Vahid Sharifian who gets away with kinky performance shots where he simulates bestiality, as when he mounts a lioness from behind in his birthday suit in “Queen of the Jungle (If I had a Gun).” And that is only the beginning. Whatever happens in Washington’s strategic confrontation with Tehran, the Iranians have already won the culture war. (Michael Weinstein)

[…] Through November 22 at the DePaul University Art Museum, 2350 N. Kenmore Ave. A review focused on this exhibition’s photographers ran in the October 15 issue. […]