Upon entering the opening reception for the collective InCUBATE’s new exhibition/event at ThreeWalls, “In Search of the Mundane,” the eponymous search proved neither long nor arduous. The first room in the gallery featured a table with chairs, a coffeemaker with mugs and a handwritten description of the evening’s main event, a trivia contest. Along the sides of the main gallery were two rows of chairs, and, at the end, a table for the trivia contest judges. Facing the judges’ table, on the near wall, hung a giant crossword puzzle that InCUBATE members had ordered rush delivery from Sky Mall magazine when they realized they needed to hang something there. The contest started fairly promptly, and I joined up with two strangers in order to display our lackluster knowledge of Cold War history, details in Moby Dick, British portraiture, sci-fi movies and romantic comedies. Oh, and the gallery’s smaller project room featured darts and a dartboard. To be sure, while they might not know the point of staging these events in a art gallery, this seemed to be an art show that average everyday Americans could hardly claim not to “get.”

And that word “everyday” is entirely the point. InCUBATE began in 2007 as a project of four graduate students at the School of the Art Institute of Chicago: Ben Schaafsma, Abigail Satinsky, Roman Petruniak and Bryce Dwyer; their name is an acronym standing for Institute for Community Understanding Between Art and The Everyday. (Schaafsma passed away suddenly in 2008, but InCUBATE has continued, recently adding Matthew Joynt as a new fourth member.) Their mundane searching is informed by pragmatist philosophy. They draw inspiration from thinkers who combined theory with practice, such as Chicago’s own Jane Addams and John Dewey, as well as the eclectic Jesuit scholar Michel de Certeau and Allan Kaprow, the artist and writer best known for the so-called “Happenings” with which he was associated in the 1950s. InCUBATE’s place in contemporary art is among the ranks of “relational” artists, for whom the goal is not to generate artifacts or performances, but to facilitate interactive situations. 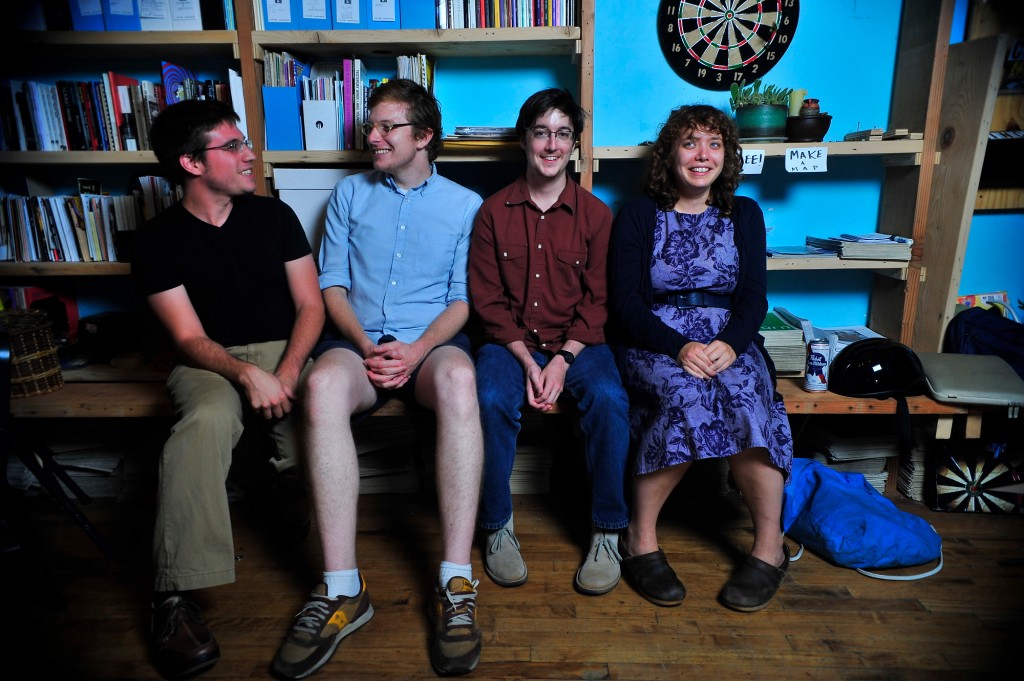 One of their first efforts was to put together a traveling exhibition and program called “Other Options,” a collection of displays and ideas from groups attending to create some kind of public-art presence without using the model of the nonprofit organization. That spring InCUBATE acquired the storefront they still maintain on Rockwell Avenue, around the corner from the Congress Theater, but not with any intention of slapping up some paintings, printing up postcards and giving away free Grolsch. Instead they built it out into a live/work space for artist residencies, and a public area where these artists could present work.

The space has since acquired a new name, The Orientation Center, as well as new functions—it houses the Chicago Underground Library and the editorial office for the magazine AREA Chicago, and their regular soup fundraiser, Sunday Soup, which generally happens once or twice a month. Centrally for InCUBATE, facilitation takes the form not only of events and projects, but of producing new models of grassroots arts funding. Soup is an iconic relational art product, from Gordon Matta-Clark’s project Food in the 1970s to Rikrit Tiravanija’s gallery soup kitchen in the 1990s. At InCUBATE’s Sunday Soup, a guest chef prepares soup and sides for those assembled, and donations raise money for anyone who applies to receive the “Sunday Soup Grant.”  Paying soup-eaters vote on which project should receive funding, and there is generally a presentation and discussion led by a guest artist. The current residents, Kansas City psychedelic utopians Carnal Torpor, recently served soup in geodesic cardboard containers with straws, and accompanied the meal with an ear-splitting noise performance. InCUBATE has begun work on organizing an “Artist-Run Credit League,” in which artists’ groups pay into a kitty that exists to provide project and emergency funding for the members, and are working on programming lectures at the MCA café this fall.

Along with promoting the work of others, the group regularly presents its facilitation efforts in art contexts, always in conjunction with others undertaking similar projects. Working with Randall Szott, InCUBATE has put together an enjoyable program for the ThreeWalls show. Still upcoming is a “Public Culture” lecture on personal storytelling with writing teacher Megan Stielstra, a series of two brunches that include a screening of a documentary on Star Trek enthusiasts called “Trekkies,” and a tour of the extensive art-related ephemera collected by local curator, writer, and editor Anthony Elms.  SAIC photography professor Claire Pentecost will be presenting her thoughts on optimism and everyday life, and, to cap off the series, critic David Tamarkin will lead a wine tasting and present a lecture on “Wine and Time.”

It remains to be seen if events like this will magically bridge the general population’s alienation from high culture. But InCUBATE has come to represent an approachable and generous conceptualism that will hopefully do a great deal to improve the culture of culture in Chicago.