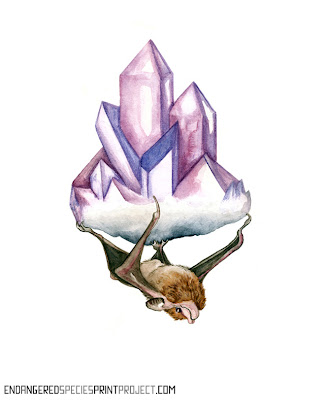 As studio artists, Jenny Kendler and Molly Schafer felt limited in the amount of time and money they could spare to champion “the magical and natural world” that they both care deeply about. Through their previous collaborations they learned that activism sometimes works better outside the gallery system. “We found there exists enormous gaps between artists and activists,” Kendler says. It’s not only awareness campaigns, but also, and mostly, money that makes a tangible contribution to activist projects. One-hundred percent of the profits from the Endangered Species Print Project are contributed to specific foundations and research groups.

Kendler and Schafer began by researching the population of the Seychelles Sheath-Tailed Bat, numbering a dangerously low thirty-seven. Accordingly, they created a print depicting the bat in an edition of just thirty-seven. Through their project Kendler and Schafer have been able to work directly with organizations such as the Nature Protection Trust of Seychelles, Project Golden Frog and The Marmot Recovery Foundation. These organizations, composed of scientists and researchers, many times are the sole entity working to preserve a species, and as a result none of the groups the women contacted have ignored their requests. In addition to contributing funds, Kendler and Schafer have been able to compile reliable, current statistics on these species in a single source: their website.

Both Kendler and Schafer attribute their connection and commitment to environmentalism from experiencing rural and natural environments at an early age. The wonder and magic the natural world holds is evident in the fantastical nature of their work. It is hoped, too, that bringing an artistic perspective to the topic will inspire new groups of people to contribute to the campaigns. It’s difficult not to get into “nature geek” mode while looking at their Web site, which lists all their print projects to date, their survival numbers, cause of endangerment and organization that receives the contribution. (Sara McCool)