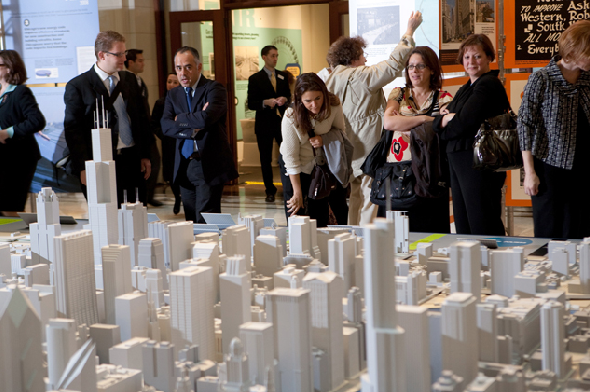 The best-laid plans of city planners often go haywire, as this expertly curated exhibit, which traces the history of Chicago’s cityscape in five large eight-sided panels with photographs from a century of changing times and informative text, demonstrates. As we are shown, Daniel Burnham famously issued a Plan of Chicago in 1909 that envisioned a “beautiful city” that materialized only in part as other plans serving other interests successively offered up slums, el tracks, high-rise public housing projects rising out of intentional demolition of neighborhoods, expressways, O’Hare Airport, and the latest “Climate Action” for going green. Although each panel is worth a long look and a close read, “Remaking the South Side: 1946”—by razing communities and putting up projects—is the most telling. The text asks: “What did the planners imagine?” It answers: “Order out of chaos.” A shot of a thriving South Side commercial street in 1941 shows that they must have been blind. (Michael Weinstein)