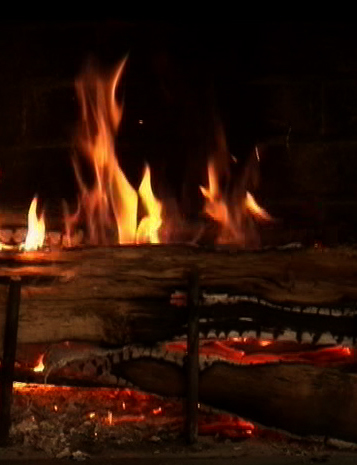 Spatially, Medicine Cabinet occupies a grand total of Bridgeport resident Chris Smith’s bathroom medicine cabinet. Given the amount of available space, exhibiting artists are rather limited from the get-go, though Jesse Mclean finds an interesting solution by converting the usually reflective veneer of the gallery space (i.e., the cabinet’s mirror) into a white surface on which she projects a short video loop featuring every type of garishly “serene” imagery imaginable including: a wild horse charging through a meadow of wildflowers, a pair of logs quietly burning and a meandering mountain brook. The images promote an all-too-easy sense of calm; the same sense of calm the pharmaceutical advertisements from which they are loosely derived attempt to cultivate in order to hawk their products; but, as the accompanying audio track reminds us, such products “may cause” anything but calm.

A host of voices recite medical side effects ranging from the mild: stomachache and abdominal pain, to the penultimately severe: blindness, rounded out by the ultimate side effect: death. Cumulatively, “Side Effects” is a restatement of the now infamous dictum uttered by Mick Jagger, which once tore at the designed surface of the pharmaceutical industry more than forty years ago: though we may go “running” to the medicine cabinet “for the shelter of mommy’s little helper,” we should obviously read the warning label before ingesting such potentially dangerous substances. But things are different today, and many harbor at least some skepticism regarding pharmaceutical marketing campaigns in the wake of hundreds of deaths directly linked to the premature market availability of drugs like Fen-Phen and Vioxx; drugs made available in a push for quicker profit before the full scope of their side effects could be completely determined. The skepticism this work posits would seem so pervasive as to prompt an eye-roll were the images and voices not so charming and sarcastically funny. (Nate Lee)