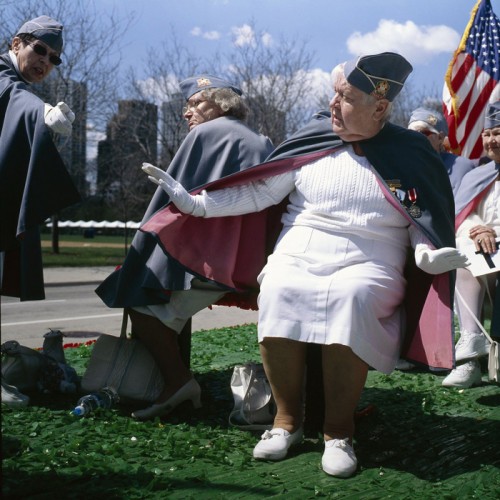 The people of Poland have endured the absence of a tangible nation-state and the ensuing dislocation, either psychological or corporeal, for so long, or at such lengthy intervals, that it becomes problematic to characterize them as such. Given this situation, Polonia, the imaginary home that isn’t quite, makes a worthy substitute. For photographer Allan Sekula, himself a resident of Polonia, the term has become a description of a complicated history of marginalization, a geographically dispersed population and a startling encounter with neo-liberal economic forces, while altogether an expression of the significance of calling oneself Polish.

Irksome for anyone concerned with the last forty-odd years of discussion surrounding photography’s once-solid claim to objective agency, Seklula’s latest collection of photographs seek to document—this term being the source of most of the trouble—the current state of this equally troublesome notion of Polonia. Collectively, the photographs offer a web of narrative underpinnings that will fascinate history and geopolitics buffs alike.

Sekula is not oblivious to the doubts surrounding his claims to honesty as a traditional documentarian, nor does he completely avoid addressing such issues. Instead, he touches upon a schism between the bare facts as presented, and his choice to intervene. The strongest example is a group of three photographs of CIA “black sites,” located in Poland, and supposedly used for the recent practice of extraordinary rendition, or “torture by proxy” as critics have dubbed it. The nature of the events, which may or may not have taken place at these sites, is hinted at but ultimately remains unsubstantiated by Sekula’s photographs. We only see the warnings to potential trespassers posted around the periphery; the true nature of what transpires within remains a mystery. Such problems arise when one tries to see that which cannot be seen, be it the true origins of one’s identity, or anything else. (Nate Lee)

Through December 13 at the Renaissance Society, 5811 S. Ellis, University of Chicago.