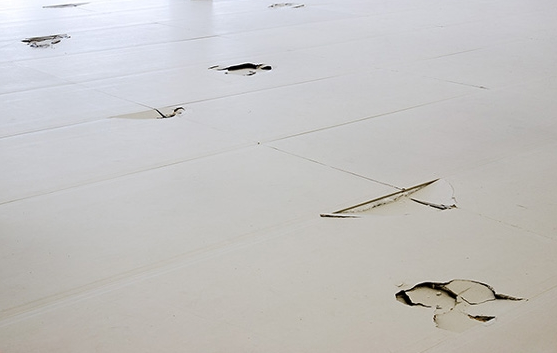 “Pothole City! It looks like the streets of Chicago in here!” an Art Institute guard jokes to a co-worker stationed inside Monica Bonvicini’s new Focus exhibition. He’s looking down at the cratered surface of a floor that’s been covered with polystyrene foam and plasterboard and then broken (by the museum’s own staff) in numerous places. Titled “Plastered,” the piece has been reconfigured twenty-three times around the globe since it was first shown in 1999. It sits beneath an enormous hanging light sculpture composed of white fluorescent tubes. Blindingly bright, the lights are too painful to stare at directly for more than a few seconds.

Renzo Piano has described his Modern Wing as “a temple of light…a building about light and lightness.” Bonvicini’s installation offers a deconstructive counterpoint to these celebrated ethereal qualities—theoretically, anyway. Just days after the exhibition opened, and the false floor theatrically pre-broken, visitors attempted to aid its deconstruction by stomping new holes in its surface. The rowdy kids jackhammered with their feet while museum guards looked on nervously, unsure if the “rules” for this particular work of interactive art allowed for such behavior or not. (Note that it’s usually the guards, not the viewing public, who must bear the conceptual burdens of artistic “interventions” like these.) The floor soon boasted quite a few more indentations than before, but the detritus was cleaned up in favor of a more groomed messiness.

I turned to the guard, my voice plaintive. “We’re not supposed to damage it at all? Not even a little bit?” I ask this even though I already know the answer. She shakes her head, tells me what happened yesterday. “You put your foot in that, it may not come back out!” We both laugh. She turns away for a moment to ask a patron to move back from the light sculpture’s sharp edges. I follow suit, shooing my daughter away from the thing’s jutting maw. The irony looms large: museums can’t not fetishize works of art. At the first hint of danger, potentially edgy interactive artworks like this one are transformed into mere simulations.

My kid, now thoroughly bored, asks if we can see the miniature dollhouses. “Okay,” I sigh. “Let’s go.” (Claudine Isé)

Through January 24 at the Art Institute of Chicago, 11 S. Michigan.