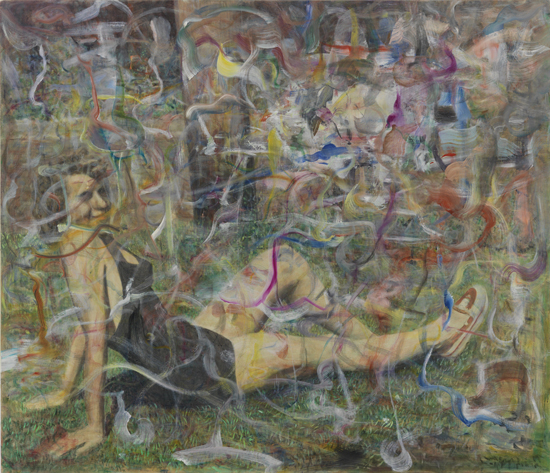 Jim Lutes’ mid-career retrospective at the Renaissance Society last winter silenced any doubts regarding the painter’s status as one of Chicago’s preeminent living artists. It also showed that Lutes, after producing exceptional work for over twenty years, is only now—owing to an unexpected encounter with egg tempera—reaching the top of his game and continuing to improve. His latest show at Valerie Carberry stands as further evidence of his ascendant arc. The paintings haven’t changed drastically since the retrospective; instead, they intensify the program he began years ago.

It seems there are two distinct types of paintings on display, the divide epitomizing a contention between figuration and abstraction in Lutes’ work, though neither side wins, as even the most earnest photorealism quickly meanders, almost disappearing, into characteristic ribbon-like flourishes. The seemingly pure abstractions, composed entirely of the ribbons, concentrate, or perhaps coagulate, into concentric masses reminiscent of an overburdened body.

While Lutes signals new horizons with his approach to painting as such, over its defunct differences, his work maintains a pensive concern for the past. When he selects overt subjects, they are typically culled from old photographs. The artist’s mother as a young woman reclines in a bathing suit and sunglasses on a grassy field, a young man in a military uniform leans against an artillery cannon: in both examples a rift between past and present is signaled by the figure’s dress and surroundings, and intensified by the transparent passages of abstract marks that envelope them. Description is constantly becoming abstraction and vice versa, pointing to the futility of such outmoded distinctions when applied to a practice that is instead concerned with the act of painting in all its manifold forms. (Nate Lee)