The signs of these times seem to be predominantly distress signals. At Monique Meloche Gallery’s new location in Wicker Park, six artists from various regions of the United States of America weigh in to qualify recession blues in two and three dimensions. Let’s start in the middle, De Moines, where Michael Patterson-Carver renders average Americans voicing now ubiquitous concerns. A place where Boteroesque Iowans gather in watercolor to lobby for healthcare and employment may also be a place ripe with vacant commercial real estate.

Kim Beck dominates the façade of the Division Street location, with monumental signage simply soliciting space. Part of an ongoing project, “Everything Must Go,” is comprised of hand-drawn signage announcing liquidation. Beck turns the lens to the employees pronouncing impending vacancies, affirming that the work is intended to speak to “the more personal repercussions of the economic collapse.” Carrie Schneider seems equally entranced by the ghosts of retail past. “Recession,” the inspiration for “Sign of the Times,” is a self-portrait of the artist as exasperated consumer doing some recession-style window shopping, her torso flaccid, gracing the surface of an empty storefront. (In December, Schneider will address the MCA 12×12 space with “Slowdance,” a short film made in Helsinki.) 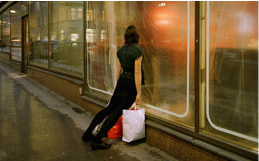 The tango of our times might be Máximo González’s “Animal Freezing Machine,” simplifying the commodity culture conversation to a mixed-media wall drawing portraying cartoon farm animals fed through the big bad globalization machine. The horizon becomes a production line for a light-hearted parable on the oppression of humanity and destruction of nature at the hands of capitalism. Just when you thought things couldn’t get worse for America, Kenneth Tin Kin Hung’s animation is a gentle reminder that the secret ingredient of crisis is false hope. A cutout of Barack Obama parades through Iraqi ruins in a dashiki, bombarded with signs of corporate interest. A remix of media spectacle, Hung’s mash-up cuts to the chase, aptly titled “In G.O.D. (Global Obama Devotion) We Trust.” America, don’t gamble on your houses anymore, don’t support war profiteers, buy domestic products, and lets see if we can’t get some healthcare on the house. (Joe Jeffers)