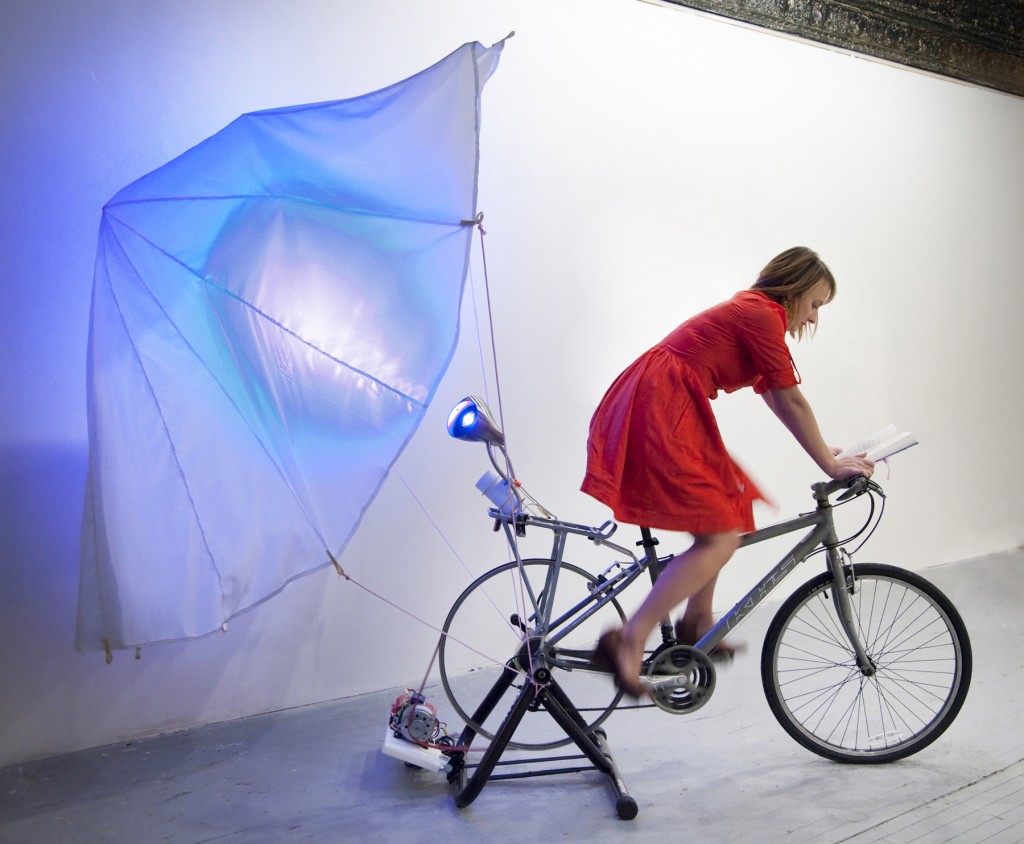 "What Color is my Parachute?" photo by James Prinz

Like many Americans, Shawnee Barton is closing out 2009 without a day job. As an artist, however, her loss of a regular paycheck also meant becoming a full-time art-maker. As welcome as that is, the change presents plenty of problems: with more time to work and fewer resources to make work with, the nature and function of her art-making has had to adapt. In her latest show, “Artist: Unemployed,” Barton addresses the private economics of creativity with work created during her unemployment.

Shawnee’s experiences aren’t uncommon, and much of her latest work has the kind of so-true familiarity of a comic monologue. With such heavy, consequential content to deal with, Shawnee’s humor acts as a psychological buoy without sacrificing the content itself, avoiding outward angst by showing inward critique. “There are many artists out there making work about the economy on a macro level by doing things like taking photographs of foreclosed homes, writing narratives about failing industries, etc,” says Barton. “I chose to address it in a much more personal and therapeutic way because for me the easiest way to tackle big issues in life and art is to bring it down to a personal level and to keep a sense of humor.”

Humor takes on function in most of Barton’s work, adding accessibility to work that has in the past dealt with such difficult and introspective topics as personal identity formation, consumption habits and relationship dynamics.

Her concern for the artist’s place in the economy extends beyond her practice. During the last presidential election, Barton served on President Obama’s national art policy committee, encouraging policies on arts and culture, such as the Artists Corps, which would mobilize artists and encourage local culture. “I want to live in a culturally rich country and to help people understand why it is important to have art in their lives,” says Barton. “And when the American work force is filled with adults that have been trained to think creatively and to use innovation throughout their lives, our country will prosper.”

She notes the expensive academic tracks for artists and the real-world challenges of turning an MFA into rent and dinner. Barton has, however, managed to put her education to work in an indirect way: she learned to play cards while earning her MFA at the School of the Art Institute of Chicago, and has since made herself a winsome career in professional poker. “I have had to spend a lot of my bankroll on art and living expenses,” says Barton.  “But hopefully when the economy turns around, I will be able to find a job in the arts or get back to the tables full-time again.” (Steve Ruiz)