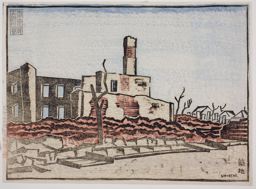 It’s not surprising that the strong, simple woodblock prints of Unichi Hiratsuka (1895-1997) would appeal so much to Chicago structural engineer Theodore Van Zelst (1923-2009) whose family just donated his collection to the Art Institute. The artist’s grandfather was an architect, and the sense of gravity weighs heavily on the grandson’s bold depictions of earth and buildings, while the collector innovated the study of soil for its load-bearing potential. Hiratsuka was an innovator as well, being among the founders of Sosaku Hanga and the first teacher of wood block printing at the Tokyo School of Fine Arts in 1935. Sosaku Hanga is the modern version of Japanese woodblock printing that unites design, wood-cutting, and printing into the hands of one skilled artist instead of three. What is lost in delicacy is gained in boldness. But beyond that technical aspect, everything else is open to the widest variety of expression. Many Sosaku Hanga artists rose to prominence in the postwar era for their abstract or neo-primitive designs, but Hiratsuka’s work seems more like a simplified version of the nineteenth-century, with a love of landscapes and occasionally young, naked women. And he lived a very long time—allowing him two almost separate lives, with his last thirty years spent with his daughter in Washington D.C., patronized by presidents and making images of national monuments. His strong, cheerful, extensive oeuvre is something of a monument itself—a monument to a life well spent in the catastrophic twentieth century. (Chris Miller)