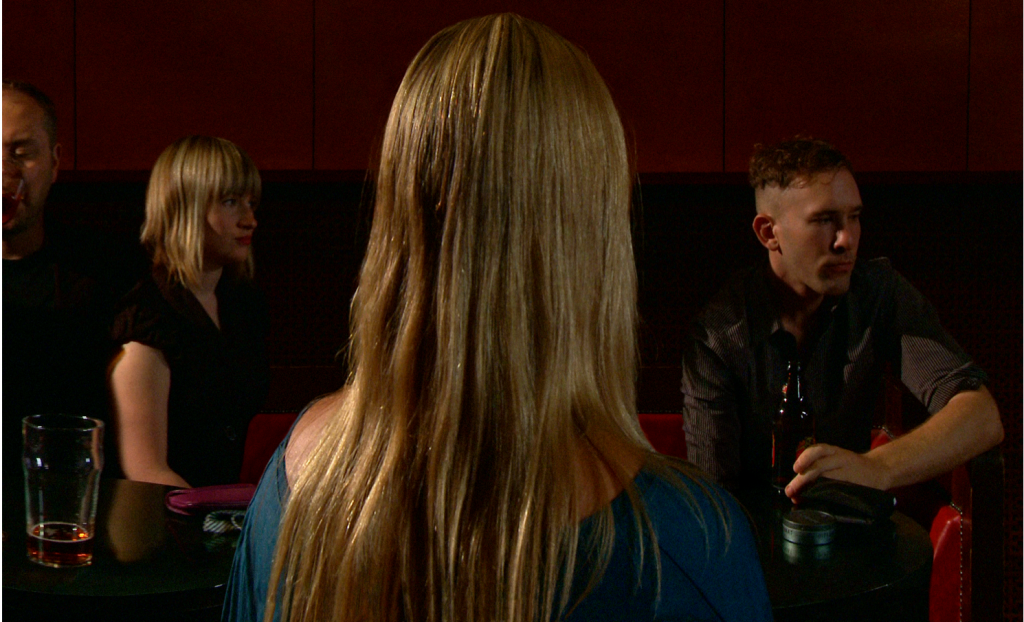 To accompany her video, where we see her dancing with a man in a bar, Carrie Schneider has placed a color scenario photo, “Still Life,” of barflies in a tavern – a man slumped over, a couple kissing, a man taking a swig of whiskey, two detached women, and a man staring off into the distance as he holds his beer bottle limply. This, says Schneider, is a slice of “bar culture,” which is also the basis of the video. By all appearances, “Still Life” depicts bar culture as a failed social form in which people are lost in their own worlds, with boozing their only principle of solidarity. We are reminded of Billy Joel’s “Piano Man,” played in the key of despair rather than mere desperation. Schneider says that she is inspired by Brassai, photographer of the French inter-war demimonde—the documentarian of decadence. Schneider’s performance video, “Slow Dance,” begins with a pan of the scene that she panoramically encapsulated in her photograph, but then we see her look at a man across the room; their eyes meet, she advances on him and seduces him into a lascivious dance as the barmaid looks on with fascinated indifference. The dance morphs into an undulating ménage-a-trois and then, at last, the two partners are once again alone together, at which point they separate, turn their backs on each other definitively, and re-enter their solipsistic detachment, receding among the barflies. (Michael Weinstein)

Through January 3 at the Museum of Contemporary Art, 220 E. Chicago Ave.