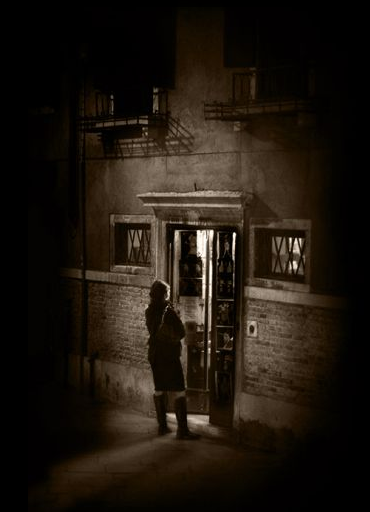 If we ever needed proof that straight photography always presents the world through a specific sensibility, we can find it in extremis in Sarah Hadley’s sepia-pigmented studies of Venice, Italy on misty evenings, seemingly frozen in time in the nineteenth-century. Whether she has fixed on details of statues, back alleys, the fabled canals, footpaths, grand cathedrals with spires soaring to the sky among the birds, or humble abodes hugging the ground, Hadley always casts a pictorialist spell, placing us alone in the fog, observing a world transfigured by a grand poignancy. Hadley is most effective in depicting seductive distance when she allows a faceless human figure into the scene, as in “Ascension,” where we see a man from behind, blackened to a shadow by the fog, walking up a flight of concrete stairs by the side of a vaporous canal. The only fruitful response is to surrender to the mood of bittersweet loneliness that Hadley consistently projects and evokes, and to forget that Venice is also a sinking twenty-first century city. (Michael Weinstein)

Through January 17 at Loyola University Museum of Art, 820 N. Michigan.