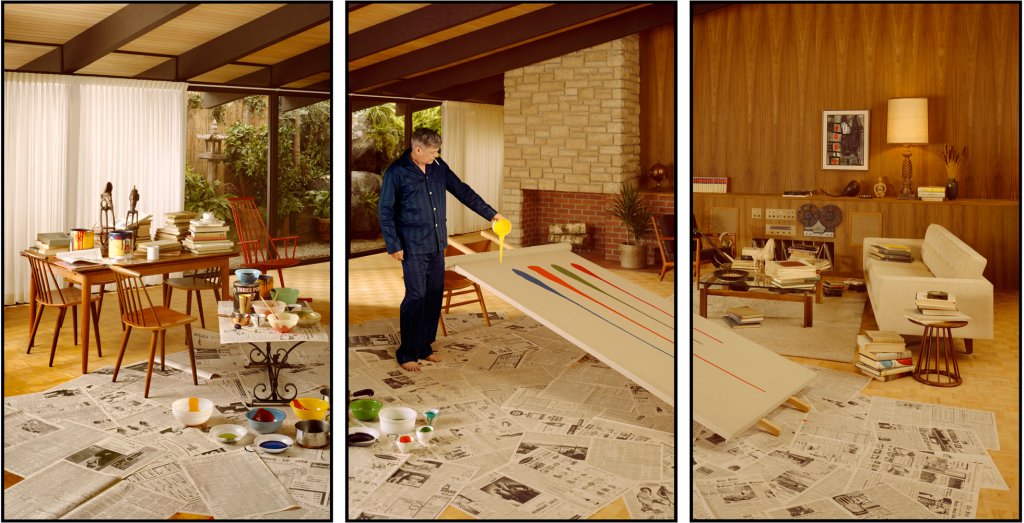 The artist is standing contrapposto in silk pajamas. He carefully pours yellow house paint from a kitchen bowl onto a sloped canvas propped on a chair in his living room. It is an experiment in gravity and inertia, and the unprimed canvas grips the drips, soon to be congealed as a picture. The artist is at ease. He smokes barefoot atop the day’s newspaper, spread about the parquet floor to catch paint splatters. Time seems to have stopped here, or else slowed to the speed of honey.

There’s something comforting about this image, as photographed by Rodney Graham. It shows the artist’s work as a leisure activity, serene and safe and tidy, but also distant from the world, and private. Is this how art gets made? The scene nods to the American Modernist painter Morris Louis and his followers, and many paintings on view in galleries and museums were birthed in similarly calm settings, but Graham’s photograph, “The Gifted Amateur, Nov 10th, 1962,” from 2007, is a fiction, more a record of a mood than an actual event.

The art studio is the image-maker’s terrain, but not all artists use a studio. As a piece of real estate, its existence is intricately tied to exhibition spaces, or the white-cube style. The twentieth-century saw artists expand their practices outdoors, into the streets and the deserts, taking on the roles of writer, curator and critic, organizing collectives and engaging publics. Artists such as Gabriel Orozco, Rirkrit Tiravanija and Francis Alÿs embody this post-studio practice, and their work is the subject of large contemporary museum exhibitions and doctoral theses. So why is Studio Chicago, a multi-venue, year-long series of events and exhibitions, looking back to a time before post-studio, when artists worked alone in their quiet cubbyholes? Why is Rodney Graham mining the suburban esthetic? The answer is that artist studios continue to exist, and that “post-studio” is not a pure designation. Orozco does in fact return to the studio to make paintings. Christo and Jeanne-Claude do sell drawings of their public interventions. Studio and post-studio co-exist.

In early 2006, Northwestern University convened a panel of artists to discuss the “post post-studio.” The double prefix here is like a double negative, so that what comes after post-studio may indeed be a return to studio practices, renewed and energized by artists nostalgic for tangible art objects. The Northwestern panel included Michelle Grabner, co-curator of the “Picturing the Studio” exhibition where Graham’s homage to leisure-class Modernism appears. It is telling that the other curator, Annika Marie, is an art historian of Modernist traditions, and that Grabner’s paintings are often steeped in the Modernist discourse. So it is the Modernist artist, toiling alone in his studio, that serves as the jumping off point for the exhibition’s premise, where studio, post-studio, and post post-studio practices are as enmeshed as the lines of a Jackson Pollock painting. Speaking of Pollock, he is referenced in the exhibition no less than six times, by three different artists, as the readymade studio artist, his mythic persona at turns heroicized and criticized, his crusty, paint-splattered studio floor the past, present and future cliché for all discussions of studio practices. 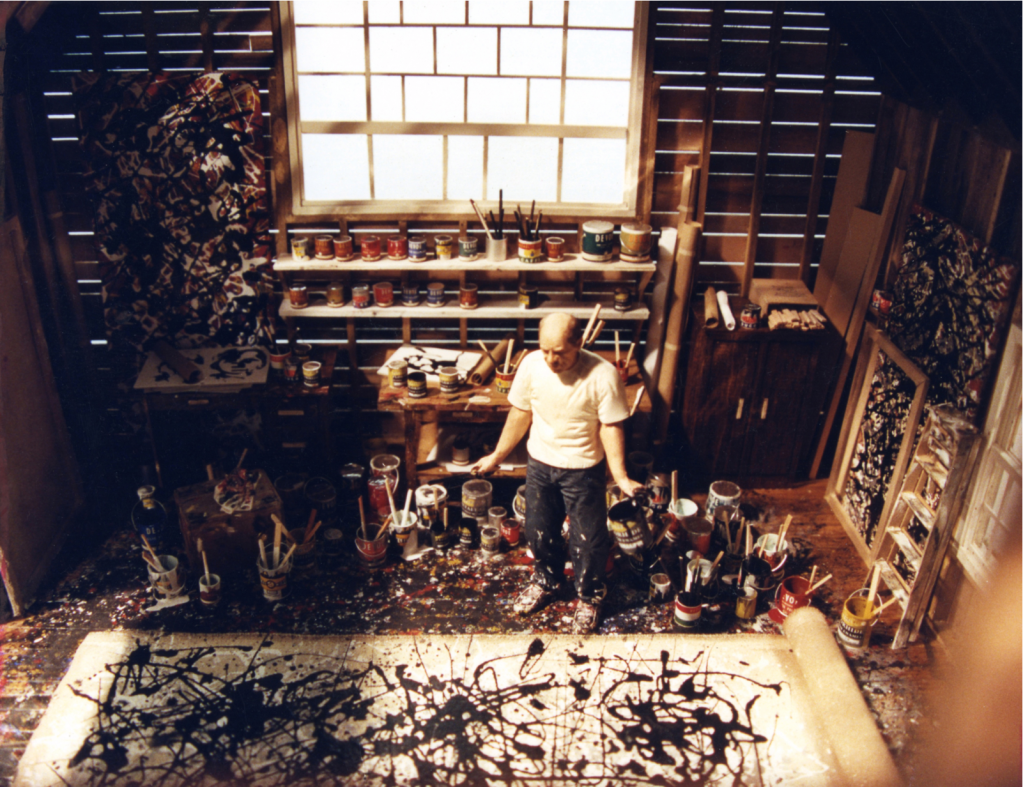 There are several conflicting artistic devices and curatorial premises here that, in sum, lead to a successful dialogue. What goes on in an artist’s studio? There is irony—John Baldessari vowing not to make any more boring art while doing just that. There is sincerity—Susanne Doremus and Julia Fish looking hard at the spaces of their studios. There is irreverence—Bas Jan Ader equating art making with flower arranging. There are moments of honest reflection, such as Bruce Nauman’s documentary of his boredom, and affectation, like Nicholas Steindorf posing as a glam rock star. Recreations of the studio shed light on production, such as Ann Craven’s photocopied source materials hung above her paintings, or Joe Fig’s cutesy but informative replica miniatures of famous artists’ studios.

The two best pieces in the show speak about studio practices tangentially, as they begin to move away from the studio. Amanda Ross Ho’s room installation is a collection of materials and objects picked up from a storage facility and her parents’ home. Nothing came from her actual studio, and yet the space activates a creative workshop-like environment, even including a photograph by Melanie Schiff, nodding to the way that some artists open up their studios as temporary exhibition spaces. David Robbins’ video, “The Ice Cream Social,” from 2002, re-envisions the television studio as an artist studio. There, he produced a pilot episode of a variety show, complete with digressions on history, politics and poetry that would be on prime-time only in a (perfect) artist-run world.

Ross Ho and Robbins’ creative re-imaginings of the studio space flirt with changes that may be in store for artists who stay grounded in the studio. Given this exhibition’s context in an art school, where studio practices dominate, the prospect of change is inspiring. In any case, the exhibition’s theme provides an excellent opportunity to engage non-art or art-shy audiences, and to bring them into the art world via the backdoor.

“Picturing the Studio” shows at the School of the Art Institute of Chicago, 33 S. State Street, seventh floor, through February 13, 2010.