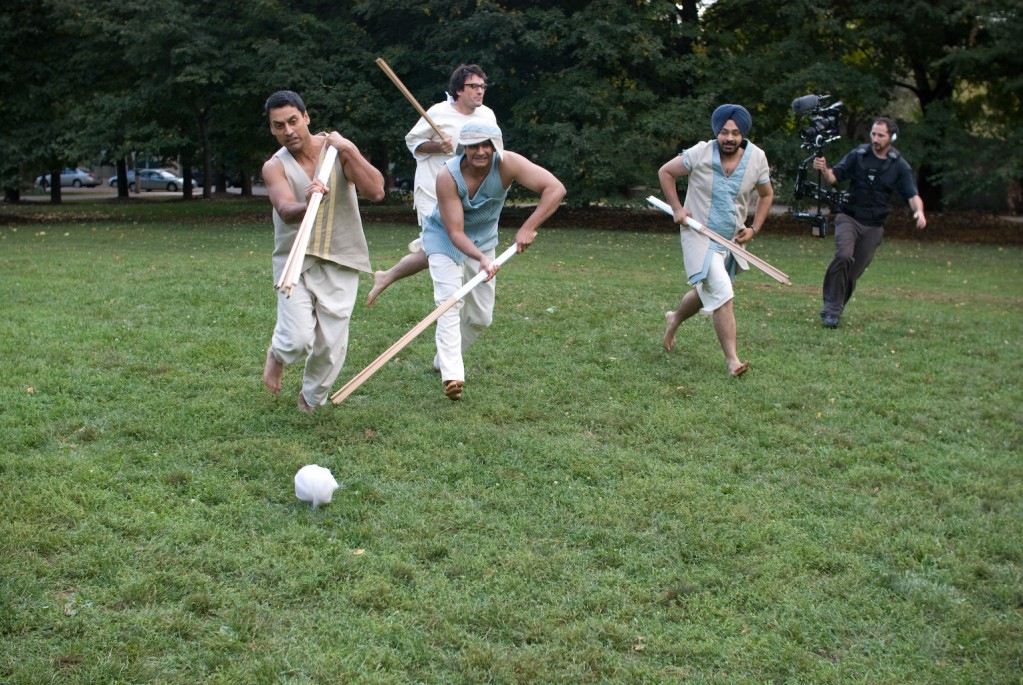 “On Sundrun” is a multi-pronged, inter-trans-disciplinary multimedia installation at Gallery 400. Masterminded by British-born, Chicago-based artist Mathew Paul Jinks, it brings strangely wrought clothing, a capella feature-length documentary and sculpture together as installation to unpack ideas that orbit a dense tangle of post-colonial theoretics. The video, shot in a swirling pass at cinema verité or some form of the reality-TV esthetic with benign post-colonial vertigo, is billed as the centerpiece. It replays an anthropological experiment involving Jinks and “five performers of Indian and Pakistani heritage as they undertake to spontaneously invent a sporting game one day in a Chicago park.”

However, “spontaneity of invention” is better understood as “according to Jinks’ plot to engineer the generation of a ball-and-stick game.” An unattributed jumble of subtitles narrate the video, marred by intentional fragmentation. Somewhere underneath that, it recounts the sentiments and observations of the performers as they play an amorphous game that begins with small talk between strangers and ends with “capture the flag or cricket.”

Hybridity is a key ingredient of any post-colonial stew, but this and/or result feels forced or prescribed rather than enunciatory or illustrative. There’s a cricket net hung as sculpture, a collection of one-off pale garments in pastels that look like Art Deco reinterpretations of culturally confused ancient sporting gear in plush or felt, and a lush a capella recording contributed and recorded by My Damn Butterfly.

These companion pieces, though beautiful, feel like the aesthetic exaggerations of the Emerald City’s chief bureaucrat. Theories of the post-colonial do not take issue with representation lightly, and this exhibit presents a situation to the public and preserves it in an archival format without broadening the installation viewer’s understanding of much of anything or allowing the meaningful discussion that it did permit (between the Indian and Pakistani men playing the game) to reach an audience in a particularly intelligible form. The project grew out of an interest in the fact that all the cricket pitches in the Chicago area appear to be populated not by Brits but those with cultural ties to India or Pakistan. And perhaps staying closer to this component of the installation’s inspiration might have yielded something more coherent and less contrived. (Ian Epstein)

I think the reviewer totally misses the point on this one. The ideals expressed by the reviewer for Jinks project constitute a complete failure of art in general if you ask this audience member. Goals like enunciation or illustration in addition to phrases like “broadening a viwer’s understanding” are better suited for theory and writers like Said or Bhabba do this beautifully with post-colonial theory of course. To ask this piece to reduce itself to clear didactics is a huge mistake. I think the artist is well ahead of the reviewer. He seems interested in presenting the problem with nuance… Read more »