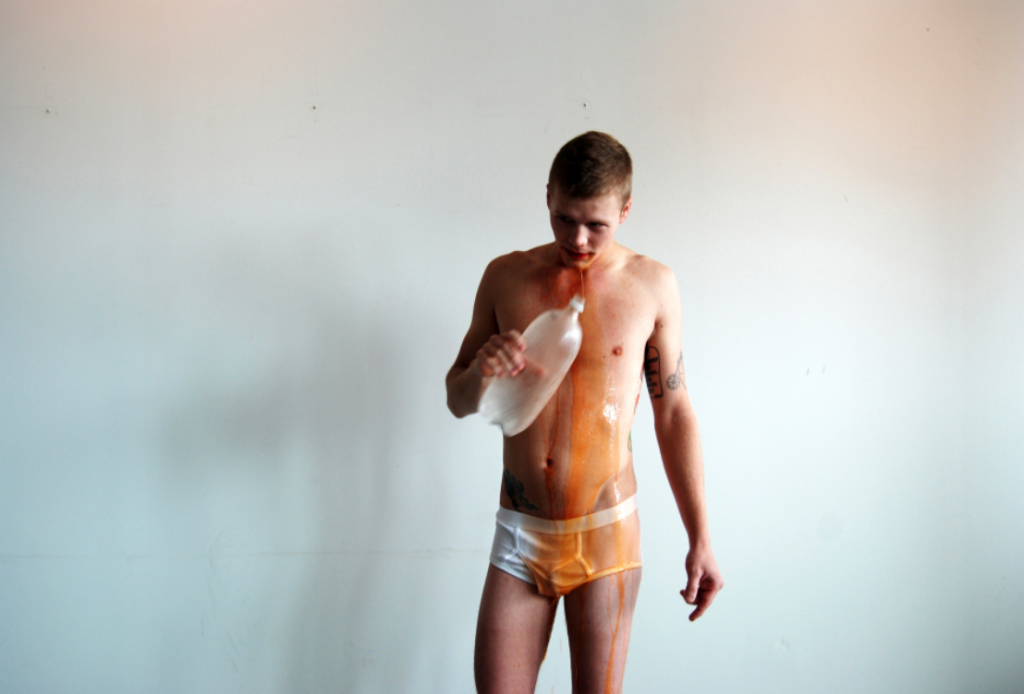 After three mixed drinks nothing was firing and I realized the bartender was pouring a heavy hand of soda into my vodka, so I switched to unadulterated beer in bottles, which made for frequent trips to the toilet. It was there, in line for the restroom at an all-male strip bar called Lucky Horseshoe, that I made niceties with my queue mate. “It’s quite an art form, isn’t it?” she said to me over the bumping bass line, jagging her thumb in the direction of a dancing sack of muscles. “An art form?” I raised an eyebrow. “Oh yeah,” she explained, “It commands such attention.” My instinct was to scoff—stripping is no intellectual diversion—but I was there with three artists, and if stripping wasn’t an art form, then it was surely an inspiration.

Among the usual clientele of touchy-feely bearded gentlemen and the skinny hustlers were gaggles of women, all giddy and grabby while shaved, jock-strapped young lads humped their legs. Easy money. We men sank back into the darkness and watched the show. The strip at this club is just two layers of underwear. It’s not much of a tease and, as art forms go, it’s a simple, popular joy, accessible all the way down the line. A bulge in the shorts isn’t a complex metaphor, but the signifiers are there for the plucking. My friend nodded toward the guy wearing a silver-chain collar. “That means he’s a power bottom.” The ass-up gymnastics could have given it away, but like the handkerchief codes of yore, there’s a deeper layer of communication for the initiated. These secrets build complicity, without which there would be no community. What about the guy with the cowboy boots, what does that mean? Oh, that’s just machismo, and totally hot.

Heterosexuals at a gay strip bar: it’s a no-blame game, no strings attached. Jealous stay-at-home fiancés have no ground to stand on while their soon-to-be wives settle for gay men at the gay bar. The libido is a directive for so much that we do, and it works under cover of career, family, fashion, food, and art. The libido must go unheralded, and satiated indirectly. Stripping needs no justification, though; it is a self-contained logic. It is the second oldest profession. Perhaps art is the third. When it is done well, it is equally direct and indirect, a fantasy posing with sincerity. As artists, we can put on a little show to nourish a weird need. As viewers, we can be heterosexuals safely ogling gay strippers. 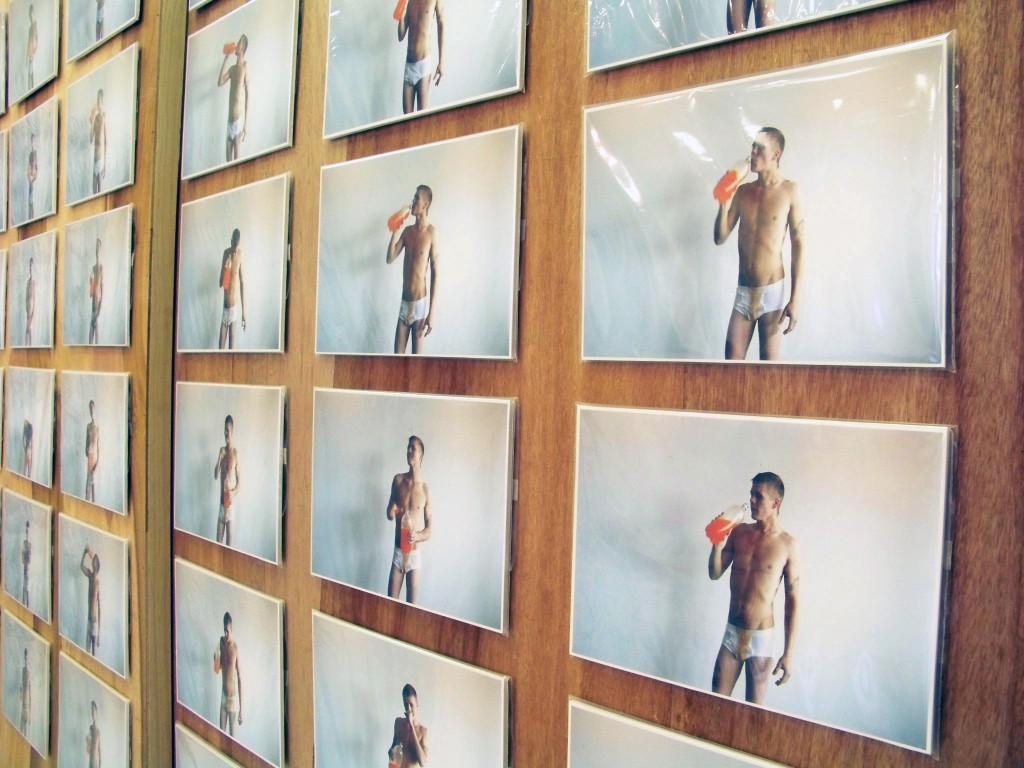 Earlier in the evening I gaped at Alex da Corte’s “Activity 91,” a series of seventy-five photographs of a young man in his underwear chugging a liter of orange soda pop. The orange drink pours down his bare torso and stains his tight, white briefs. A few frames later, the young man is embarrassed, but then you can see he understands what he’s being told, off camera, by the artist: finish the task. More orange soda down his chest and now he’s a pin-up boy, the liquid cascading off the arc of his oblique abdominal muscles. This young man, plucked from the street by da Corte, is one of many that the artist courts back to his studio. “They always say ‘yes,’” says da Corte, but no sexual act is performed beyond the task at hand. They are straight, young, and perfect. The resulting photographs recall early physique porn. There were no explicit sex acts in those black-and-white poses, just human diagrams of muscles and slicked hair. They were a perfect substitute, a self-lie: bodybuilding for sport and for pleasure.

Da Corte’s photos are accompanied by an excellent essay by William Pym in a small zine published on occasion of the exhibition of “Activity 91,” the orange soda boy photos, at Golden Age bookshop in Chicago. Of the boys, Pym writes, “You could stare at them; they’re visually compelling.” As an afterthought he jots in, by hand, “Even a straight boy could see that.” So, everyone is complicit. There is no shame, and if there is shame, that will be part of the fantasy. Most of da Corte’s models are between the ages twenty-one and twenty-seven. A man’s libido starts to wane around thirty years old but one must carry on.

At the Lucky Horseshoe, after awhile, some of the strippers get tired, or bored and restless. Their replacement hasn’t shown up but they can’t leave the stage, so they listlessly step side to side or drink a soda. They stop collecting dollars. Viewing the same guy for half an hour can get tiring, too. What holds the dancers’ attention? What holds ours? Da Corte’s photos, though, persist. They record a stranger’s first strip tease, a blooming instant of self-recognition. Da Corte shows his models that their bodies mean something. As for us, we’re still staring, still thirsty.