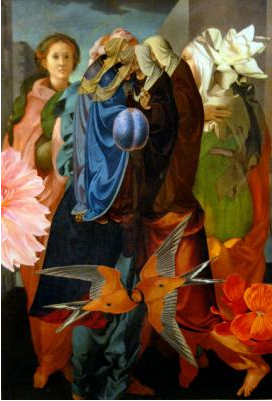 The stark contrast between photographic postmodernism and modernism could not be demonstrated better than in Doug Stapleton’s photo-collages—rife with exuberant cultural play—and Paul Clark’s straight abstractions of tomato cages and fencing that captivate with their complex and dynamic forms disturbed by disorder. Postmodern globalized mélange reaches its limits in Stapleton’s “The International Style,” which is a collage of statuary heads from various civilizations cut out from appropriated photos and arranged in a jumble that juxtaposes Jesus and a fakir, along with other improbable combinations. Turn to Clark and you will find an old-school photographic fundamentalist whose black-and-white images are exquisitely balanced in terms of the values of light, tone and composition; and result from a meditative and concentrated practice at the antipodes from Stapleton’s unbridled romp through history. Yet Clark’s stills are alive with the dance of rebellion against rational order, as the tomato cages twist in the snow and the fences buckle, warp and split. (Michael Weinstein)