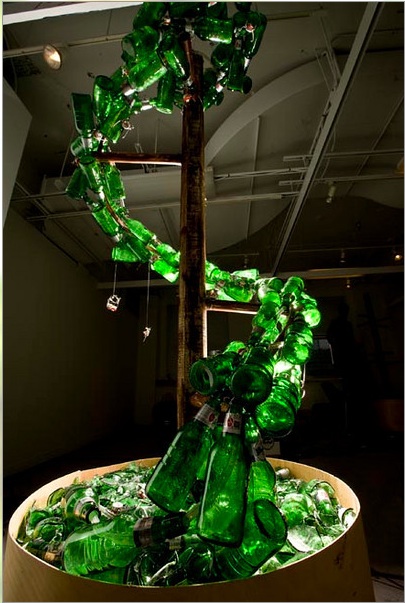 If your New Year’s resolution is to quit grazing on free booze at art openings, then the MillerCoors corporation is glad to help. The purveyors of Grolsch beer announced in mid-December they would no longer distribute the tasty lager to the art crowd, ending a three-year party, beginning this January 1. The fifteen-ounce bottles were distributed at commercial gallery openings, smaller alternative spaces, and the fairs Next and Art Chicago, in the Merchandise Mart, where somebody (presumably an artist) constructed the green glass bottles into sculptures and party props.

“A new marketing approach will be developed for the brand, which will focus less and less on the art community,” writes the brand’s representative. Grolsch rightly assumed that artists like to drink—that’s where they get their inspiration—but the promotion never successfully displaced Old Style as the Chicago artist’s beer of choice. However, Grolsch’s graciousness came at an opportune time, as artists were thrust head first into the economic recession. One West Side nonprofit space served their free supply of Grolsch to patrons by donation, maximizing the revenue factor.

The tradition of serving free food and alcohol at art openings has always been ruled by a social contract, often unspoken, between host and visitor. Art food is a gift with many invisible strings. But Grolsch was something unique. The guilt-free supply of beer from a major corporation freed the complex bonds of the gift economy in such a hyper-self-aware context as the art gallery, thereby enabling an ease of communication, and community (and maybe sales). I have even, on several occasions, used Grolsch as a ploy to welcome my friends to art openings. “There will be free beer” is a phrase I can no longer utter, too shamed by gallerists, too humbled by art.

While the announcement is a major blow to my flowering alcoholism, it remains to be seen if art openings will be thinned of the roaming packs of boozehounds and undergraduates. Many thanks to Grolsch for three artful years! (Jason Foumberg)