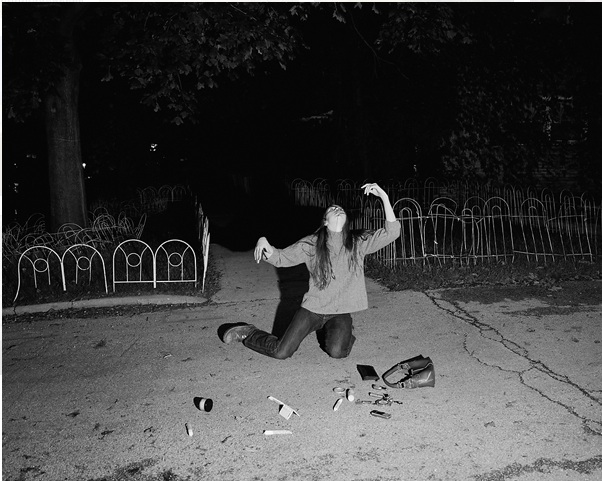 A sense of distance pervades the images of the three young photographers here who are either current students at the School of the Art Institute or recent graduates. Casey McGonagle adds a creepy note in his black-and-white pigment print, “Deadman’s Park,” in which we see the subject sitting stiffly on a bench next to a trash can in the shadows of night, dressed in black and completely hooded in monstrous headgear that sports a hideous long snout. Robin Juan takes the opposite tack in her color portrait of a young woman, in which we see the subject fade into darkness with only the faintest trace of  her face—Caravaggio with only the dimmest illumination, which reveals the woman’s hauntingly beautiful features only on close inspection. Sam Sieger’s highly pixilated digital print, “Splash,” renders the water play in such an attenuated fashion that it threatens to become an abstraction of motion. This slice of the up-and-coming generation shows a decided turn towards alienation, which is only appropriate for our times. As Sieger puts it, “I am skeptical, but I don’t want to be cynical.” (Michael Weinstein)