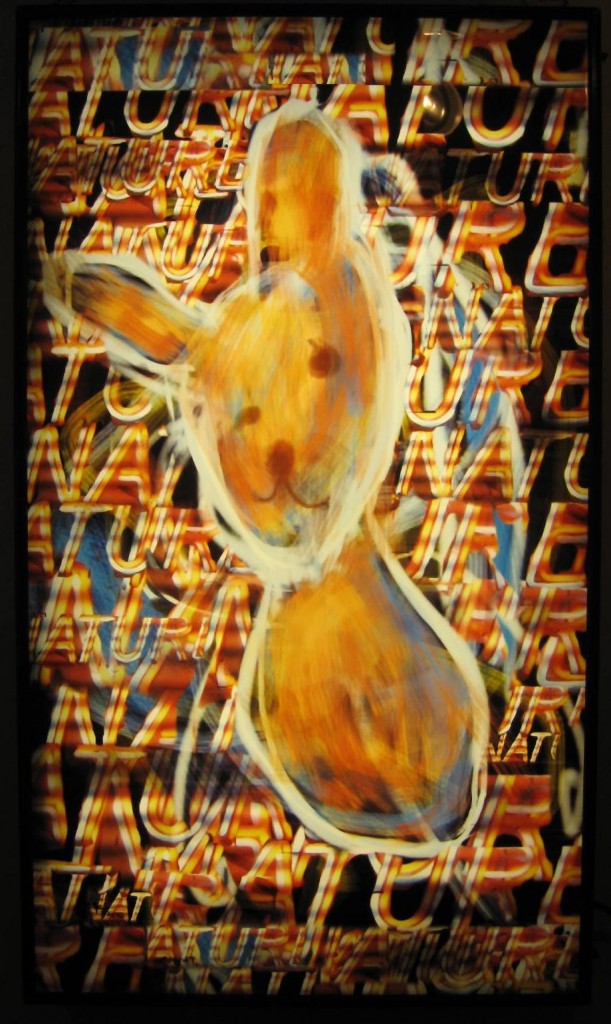 It’s opening night and the gallery goers at the Chicago Art Department are on their phones. Their iPhones, to be exact. Far from being bad etiquette, this reinforces the show’s argument that the iPhone is a valid artistic tool. Mike Nourse and a group of Chicago artists explore the artistic uses of their new technology, sharing apps and techniques with each other in a five-week class, culminating in an exhibition. Their dialogue grew to include Susan Murtaugh, an established iPhone artist from Wisconsin, as well as international iPhone artists. For many of the “iArtists,” this is their first exhibit in a gallery context. Translating their virtual work into a physical medium results in a variety of subjects and styles, from “fingerpainted” and photographic works printed on aluminum and paper to videos playing on multiple computer screens. Gallery placement and similar presentation methods maintains a sense of unity throughout the show. The sold stickers dotting pieces confirm the work can be considered “real” artwork, at least by commercial gallery standards. The show works well visually, and there’s some great tongue-in-cheek commentary, such as Nourse’s payphone photographs and Nathan Peck’s “iSick,” which incorporates videos of what would be hard-to-reach places with a larger camera; very appropriate when depicting Gingivitis. However, the artwork’s true magic is in the viewer’s knowledge that the pieces were originally created using the same phone in their pockets; easily accessible almost any time, anywhere, turning the everyday world into an artist’s studio. A viewer complimenting an artist expresses a wish to create his own iPhone artwork, but laments he bought a Blackberry two weeks ago. “Two words,” the artist says, “Return it.” (Patrice Connelly)