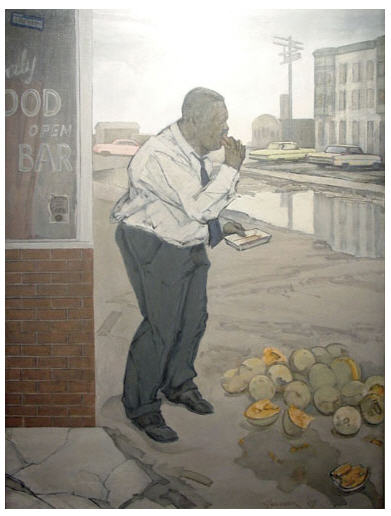 Robert Guinan (born 1934) has had a storybook life as an artist. Plucked from the obscurity of teaching art at a suburban Chicago high school, he was picked up by Gallerie  Albert Loeb, 12 Rue de Beaux Arts, Paris. France, which bought everything that he made for the following thirty-five years, selling him as “un peintre en marge du reve Americain.” Freed from the burden of a day job, as well as having to market his work, he could spend the rest of his life doing what he does best: wandering the streets of Chicago and sketching the folks in bars, especially blues bars, and especially those from the African diaspora, all of which apparently fascinates the French bourgeoisie. But what can we Chicagoans make of it?  I think he’s really nailed what some of these dives feel like, with that combination of despair, neglect, desire and perseverance. And Guinan makes some of the best pencil life-sketches I’ve ever seen. But if you’re going to distinguish between illustration and painting, I don’t think he’s made that transition. Like his boyhood hero, Herbert Morton Stoops, his images belong on magazine covers rather than walls. They reward curiosity more than sensuality. Nearly forty years ago, critic Hilton Kramer wrote, “’He strikes this observer as an artist of distinctly limited gifts who makes his impression primarily on the basis of his timely and dramatic subject matter.”  But now that the great age of American illustration has passed, perhaps we can better appreciate the gift of forcefully presenting dramatic subject matter, which was, perhaps, a bit more forceful in his early years, when he was more excited about street musicians, whores and derelicts. His recent work has grown “more careful.” as he would say, and he’s begun to illustrate stories from the bible: Noah, Daniel and Jonah. They’re pleasant, but still don’t present any kind of “reve Americain” that this American would like to pursue. (Chris Miller)